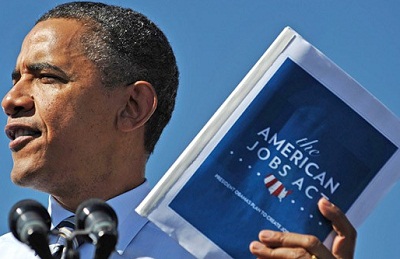 Only a better than expected (366,000 new jobless claims) figure could boost U.S. market and economical confidence.

Indeed, last Friday’s report was shocking: America is creating employment almost at the same rate as three years ago. To get back to pre-crisis levels, more than 300,000 new jobs should be created every month through 2016. However only 115,000 jobs were added in April.

Job creation is remaining stagnant because of many reasons. There has never been a surge of job creation to make up for the jobs lost during the crisis. The skills gap, a shortage of workers with the training needed to fill the jobs that are available, is big. The public sector continues to cut jobs and private companies are not using their profits to hire new workers either.

Figures are tricky because at the same time the unemployment rate dropped from 8.2% to 8.1% (although the rate among African-Americans and youngsters is 13%). That is because “labor participation rate,” the percentage of working-age people who are considered to be in the workforce, has been declining since the recession began. The baby-boom generation is getting retired. America is getting older.

ANOTHER ISSUE FOR THE POLITICAL ARENA

The timing of this figures is particularly auspicious for republicans.

“Americans in the middle class are feeling squeezed even if they have jobs,” GOP candidate Mitt Romney said this week. He described the last job creation figures as “terrible and very disappointing.”

President Barack Obama, who has called the middle-class jobs deficit “the defining issue of our times”, knows that in order to win the election in november he needs on average between 125,000 and 150,000 jobs to be created a month, according to analysts. If the figures don’t surpass 75,000 he is likely to get into trouble face to Mr Romney.

“The economy lost 5 million jobs in the year before President Obama took office and nearly 4 million more before his policies were fully implemented,” explains Chairman of the Council of Economic Advisers for the President, Alan B. Krueger. “Thanks in large part to the support for aggregate demand from the Recovery Act and financial rescue measures put in place by the Treasury and Federal Reserve, the downward spiral was halted in the middle of 2009.”

Krueger recalled some iniciatives to preserve jobs, such as the rescue and restructure of Chrysler and General Motors. He insists that more manufacturing companies are considering shifting their production back to the U.S. because labor costs have fallen since 2002.

“None of the business people we met complained about regulations or taxes. Instead, they said that better infrastructure and assistance with job training would help accelerate reshoring,” said the White House adviser. He stressed the importance of education, its lack being one of the major contributors to the middle-class jobs deficit.

So far, job creation numbers through the first four months of the year have been helpful to democrats. But Obama’s popularity is not at the same levels as in 2004. Also in this country the national jobs data get the most of the attention, although state-by-state numbers may be more important in the electoral battle.