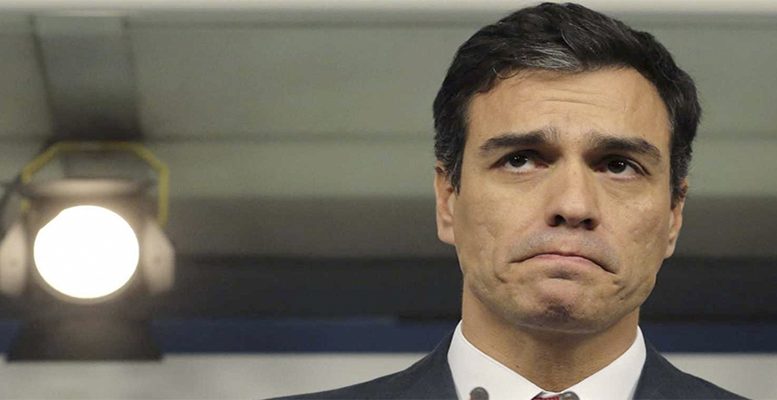 J.P. Marín Arrese | This motto struck by Bertrand Russell galvanised those opposed to the nuclear weapons race. In his view, surrendering to communism stood as a less harmful choice than the dire prospect of massive immolation in a new world war. Fortunately, we skipped confronting the bad and worst alternatives Mr Russell thought would inevitably emerge.

In a less dramatic scale, Spanish politics face a similar dilemma as the caretaker PM Sánchez stubbornly denies his leftist partner Podemos any chance of holding a position in Government. Undoubtedly, he prefers sacrificing his premiership rather than leading a Cabinet dyed in too igneous red for his taste. Fears that such a coalition may collapse before one single year elapses look seldom overdone. Even if Podemos Ministers behave in a loyal and orderly manner, indulging in self-restrained efforts they hardly could endure for long, such a joint government would fail to secure majority support in Parliament. It would lay hostage to pro-independence Catalan parties forced to react raising the stakes as a harsh Court sentence will probably fall on their leaders quite soon.

In these circumstances, Mr Sánchez likely prefers to cash-in potential gains holding early ballots, instead of risking sizeable losses should the General Elections follow a discomfiture of the unstable and short-lived Government he would deliver. Voters are likely to chastise him for such failure, regardless of the responsibility resting on him. Furthermore, as the economic tide is swiftly turning, the worst scenario for anyone in office might materialise. A bad omen if you aim at running your candidacy for yet another term.

While sharing power with Podemos extremism would severely undermine the Socialists’ goal of becoming the pivotal political force in Spain, one wonders why Mr Sánchez offered to such an untrusted ally a Vice-presidency and three Ministerial seats back in July. Probably he gambled his counterpart, blinded by the ambition of securing a better deal, would refuse to compromise. His bet proved right, but he took a highly risky decision in casting it.

At the last minute, when Parliament was sitting for Mr Sánchez nomination, the Podemos leader made a last-ditch attempt publicly accepting what up to then he had dismissed as an empty and humiliating bargain. But, Mr Iglesias utterly missed the target by requiring, as a face-saving and hollow token, his colleagues in Government to manage the active employment policies. This hectic and clumsy endeavour to salvage a sunk bid received a blunt rebuke.

Tabling the same undisguised surrender now, has met a similar fate. Mr Sánchez would only accept Podemos’ full submission: agreeing to a set of measures and offering unconditional support to the Cabinet from Parliament back-benches. A too-hard pill to swallow setting the stage for snap elections in November.

Mr Sánchez has out-manoeuvred Mr Iglesias by displaying a skillful command of the political game. Yet, even if he snatches larger Parliament representation in the coming election, he will find himself back to square one when trying to take office. He cannot count on the right-wing parties’ benign neglect. His only hope lies in their lasting inability to present a joint voting platform, thus increasing the Socialists’ seat score.

His premiership will once again depend on Podemos willingness to support him. Also on the improbable prospect of forming a majority free from the current pro-independence parties’ decisive influence. This time, the price to pay could involve nothing short of a coalition, undermining Mr Sánchez masterminded strategy. Probably, he bets Podemos will dampen its demands as extensive damage in the polls takes a toll. But it might also trigger a move to exacerbated positions plus the danger of internal rift and potential split, thus reducing the chances of getting enough Parliamentary backing. Maybe he also bets the pro-independence parties will prefer his premiership rather than risking a right-wing Government in Madrid.

A hazardous bid in a poker-game where people’s interests are at stake. Let’s hope the centre-right party Ciudadanos will, at the end of the day, stand up to fully meet its responsibility, breaking the intractable deadlock currently trapping Spain.