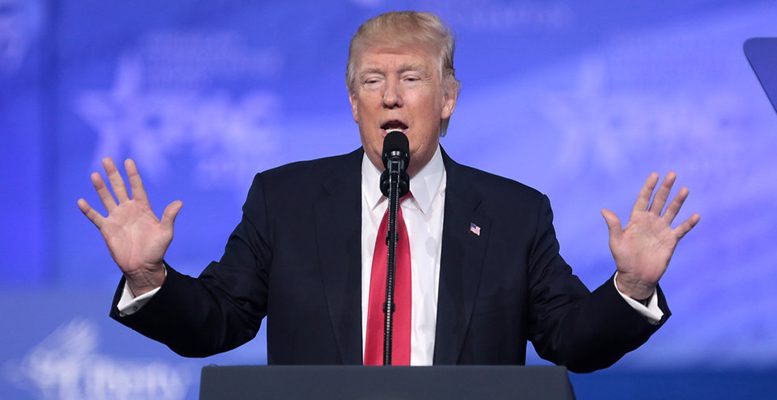 Peter Isackson via Fair Observer | Politics and literature have much more in common than most people think, especially if we accept to consider Donald Trump as a major literary figure.

Conventional wisdom sees literature as an author’s imaginative attempt to reflect the world. “Art imitates life” goes the saying. On certain occasions, reporters of the news, surprised by the stories they cover, speak about life imitating art or history aping literature.

Great literary minds have often mocked the naive idea that literature seeks to imitate reality. They tell us that literature abides by its own rules — both simple and complex — and creates its own worlds in its respect for certain largely tacit rules of storytelling.

A generation of 20th-century writers, such as James Joyce and William Faulkner, managed to bring about an unexpected shift in the art of storytelling. Rather than building stories exclusively around observed events and the actions of characters, their narration focused on mental processes, from raw perception to fantasies and unconscious drives and impulses.

This correlated with the rise of Freudian psychoanalytical theory that insisted on a separation between conscious, rational thought and what Sigmund Freud identified as unarticulated unconscious stirrings combining perception, memory, reflexes, symbols, instincts and emotions in an often inchoate magma of thought processes.

When, in the hands of a good writer, it became a standard tool for representing the workings of characters’ minds as the story unfolds, literary theorists gave it the name “stream of consciousness.” Instead of traditional literature’s steady series of well-constructed sentences and rationally elaborated paragraphs, the flow of a novel’s story could now be disturbed by the characters’ random thoughts, perceptions and bursts of emotion, transforming the reader’s perception of the story and its logic.

Fast forward to the year 2019. Business Insider reports that White House insiders have detected a similar shift taking place in the policy-making mind of US President Donald Trump: “[He] often airs his grievances publicly, either on Twitter or while speaking with reporters, which means the world has an unprecedented window into the president’s stream of consciousness.”

1. A carefully managed technique that sophisticated authors use to allow the readers of their stories to feel they are discovering the full range of thought processes in the minds of characters in a fictional story

2. The standard technique of governing and making policy for some 21st-century leaders, whose notable exponents include President Trump and British Prime Minister Boris Johnson

Anthony Scaramucci recently characterized Trump as being in a state of “severe mental decline” and expressed the hope, as a committed Republican, that Trump would take the easy way out and resign at the end of his term, saving himself ongoing shame and the US any further damage to its system of government and reputation in the world. That seems very unlikely for anyone committed to the genre or the style. James Joyce experimented brilliantly with stream of consciousness in “Ulysses,” setting a standard no one could equal, but then 17 years later, he offered the world “Finnegan’s Wake,” which read like a radical assault on the very rules of stream of consciousness Joyce had already sanctified.

Trump has never shown literary talent of any sort, but he may have something in common with Joyce. His taste for the delirious freedom of stream of consciousness seems to be increasing over time. The intensity of the stream and the looseness of his consciousness have grown exponentially after nearly three years as president and five years of playing the role of political shock jock.

If Trump stops being president, he will lose his privileged publishing platform as he returns to being a private real estate huckster, whose opinions and judgments will interest no one, not even Fox News. Trump will never gracefully resign at the end of his four-year term. Twitter and the presidency are now indelibly linked. The nation itself has come to accept Twitter as the mediator of all things political and cultural. Trump’s sees his stream-of-consciousness Twitter feed as the source of the nation’s vitality and, more pertinently, his own oxygen, without which he would suffocate.

Governing by stream of consciousness is truly a 21st-century invention. We can trace Its origins to the influence of Ronald Reagan, the first US president who acted like and was perceived by the public as the equivalent of a fictional character. Reagan established the art of political hyperreality, though he didn’t create it.

John F. Kennedy sowed the seeds that grew into the hyperreal world of US presidential politics. Just like Freud, Kennedy put dreams at the center of his political universe, starting with the powerful election campaign fantasy of a “New Frontier” and ending with the posthumous vision of Camelot. Though his sojourn in the White House was short (1961-63), Kennedy’s PR team, in recycling distorted streams of history from the Wild West and King Arthur’s Britain, paved the way for the nomination and election, a mere two decades later, of a political simulator from Hollywood.

On some occasions, though certainly not systematically, Reagan experimented with the stream-of-consciousness liberty that consisted of expressing politically wild ideas, a practice that was common in the movies but uncommon in traditional democratic politics. Prime examples were his “evil empire” and “Star Wars” (Strategic Defense Initiative), which the public greeted as if they derived from the president’s mystical insight into the deeper logic of history. But like the painted façades of a movie set, they more accurately reflected Reagan’s professionally induced Hollywood taste for the veneer of crowd-pleasing illusion. Hollywood routinely brainstorms and preens suitably crazy ideas and then, with a fine sense of calculation, produces and markets them as a form of outlandish fiction that the public is ready to accept as more real and far more desirable than their daily lives.

Marketable political fiction came to dominate US presidential history from John F. Kennedy to Bill Clinton. It represented a predictable but modestly hyperreal form of storytelling respected by all political professionals. It tended to include as a standard plot the idea of an easily identifiable villain. This took on the now-familiar form of negative advertising: TV spots that focus on the crimes, sins and ideological failings of the opposing candidate.

The pattern held until the arrival in 2000 of George W. Bush, who, in his campaign, smiled benignly as a “compassionate conservative” to squeak through as president, once the hyperreal combat of the Florida recount declared him the winner despite losing the popular vote. Instead of compassionately empathizing with the majority who voted against him, for clearly ideological reasons, Bush immediately began undermining US institutions from within, including the carefully constructed and increasingly hyperreal PR image of American benevolence driven by humanitarian compassion and democratic respect.

Bush succeeded in getting elected by crafting a public persona with rough edges, who wasn’t completely mentally incompetent and who abused language in ways that ultimately had the effect of undermining Americans’ belief in the meaning of words. Stream of consciousness as a feature of political discourse had become a dominant trend. The well-documented litany of mangled pronouncements known as Bushisms underlines how the man known as “W” succeeded in transforming the art of presidential storytelling, a feat equivalent in the trivial world of politics to that of the James Joyce with “Ulysses” in the realm of literature.

President Bush pushed a little too hard, clearly upsetting the economy and compromising beyond repair the US empire, according to historian Alfred McCoy. Barack Obama made a valiant attempt to reestablish the stream of conventional storytelling in presidential discourse. It had no lasting effect, possibly because, as his initial PR strategy during the 2008 campaign, he had chosen to ride on the wings of “change” and “hope,” both of which undercut the basic premise of storytelling, which always builds on the perception of events that have already happened (even science fiction as a genre focuses on using what might happen in an unknown future to tell us with augmented force what has already happened).

The experiments and hesitations of the Bush and Obama years opened the door for Trump to become the first purely and completely stream-of-consciousness president. It’s true that the emergence of Twitter during the Obama years as the quintessential medium of political, philosophical and moral thought in the US provided the necessary historical conditions and the ideal platform for Trump’s success as a mentally unbalanced raconteur. Trump’s innate talent for stream-of-consciousness policy-making actually had an effect on Twitter itself, helping to push its weight limit from 140 to 280 characters. This enabled Trump to invent his inimitable style of concatenated tweets (connected by dots) that opened the floodgates for hyperreal stream of consciousness.

And so we may notice today that the two greatest hyperreal proponents, Donald Trump and Elon Musk, have cleverly combined their forces to create what amounts to a politico-literary revolution. Each man has his role to play: Trump provides the continuous stream of tweets, while Musk (as we recently observed) focuses on his own essential mission: “to continue consciousness into the future.” Trump provides the stream and Musk the consciousness. It’s a stream whose not-so-gentle flow promises to take us to Mars and beyond.