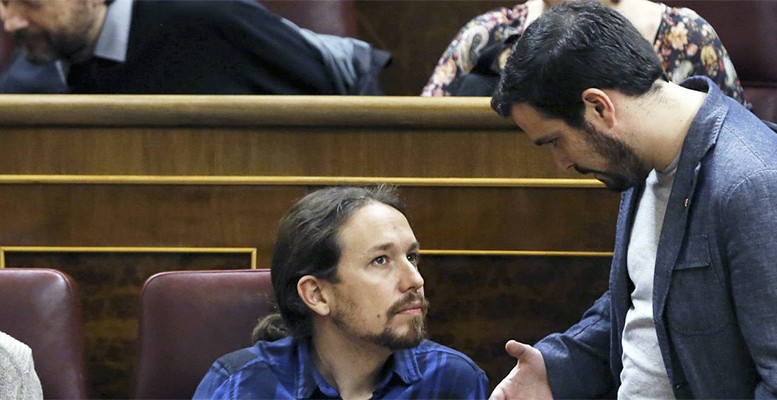 The extreme left-wing manifesto issued by the Podemos-IU coalition aims, in earnest, to completely change Spain. And it would endow it with a Third World country status. By promising to secure a minimum income close to the current average wage, who on earth would put up with the hardship of working all day long? The coalition would certainly do away with unemployment but at the cost of obliterating any sign of economic activity. Who could foot the bill for such a reckless scheme? It would result in Spain’s bankruptcy, with pensioners, the jobless and civil servants facing downright misery, while public services might simply collapse.

The fancy that the ECB should take on board all public debt over and above 60% of GDP at zero interest would certainly provide an escape route to fully-fledged profligacy. But it seems highly unlikely that any other country would endorse this move. Any attempt to put forward such a completely insane idea would backfire, casting serious doubts on Spain’s willingness to fulfil its commitments. Who would be foolish enough to buy bonds when the State issuing them shows an open reluctance to pay back the money lent? It would lure savers and investors into a deadly trap, fuelling widespread insolvency.

The extreme left-wing coalition seems ready to turn current social problems into a nightmare scenario. It openly advocates an onslaught on market activity, introducing the most rigid industrial relations around and the toughest environmental standards worldwide. Massive closures would follow, disrupting the Spanish economy.

Such an implosive manifesto doesn’t stand up as a serious governmental programme. It merely aims to cut the grass under the Socialists feet, providing the coalition with leadership amongst the opposition. With their rivals cut to pieces or forced into submission, it would patiently wait for a chance to storm the Premiership and take parliamentary control. Once in office, most of the coalition’s promises would be forgotten, with the blame firmly put on inherited wrongdoings. Podemos is targeting a total assault on power, regardless of the cost for ordinary citizens. While it cajoles people facing daily problems or those willing to blast to pieces a society they deeply despise, it carefully avoids disclosing the collective suicide its recipes would entail. Many Spaniards react angrily at the widespread corruption, the lack of decent jobs, the increasing gap between the haves and the have-nots. But they should think twice before casting their vote for those prepared to turn the country into a desert, for the sole purpose of achieving their political ambitions.

Podemos doesn’t look as if it will be able to seize power for a long time to come. But should it lead the opposition, their shadow cabinet could eventually find itself entering office. A bleak outlook which the Socialists can barely match. Should they support the incumbent government, their chances of survival would be close to nil. Should they fall behind Podemos, voters eager to get rid of right-wing policies would switch to the party better placed to accomplish that task. In both cases, the Socialists and Spain would play a lose-lose game.