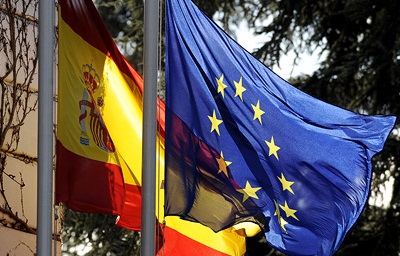 By Julia Pastor, in Madrid | Report and counter-report, this seems to be the general trend in talking about the Spanish economy’s health. Wednesday it was the CEEC’s occasion to present a report. The nation-wide competitiveness council integrated by presidents of the big Spanish multinationals assured that

“expected losses in the the banking sector are limited. Since 2007, the industry has assumed €190 billion of them, including implications from last February and May Royal Decrees. We are nearing the end of the losses absorption process.” The council also said that the country’s risk premium should be around 150 basis points because this spread “would be more coherent with  the Spanish economy fundamental,” instead of the current over 450bp.

On Tuesday, the OECD’s Outlook report had warned about the need of speeding up the recapitalisation of the viable Spanish financial entities and closing the ones that are not. The Institute of  International Finance, too, estimated the Spanish banking industry would have to provision between €218billion and €280 billion to clean up its troubled loan portfolios, a figure much higher than the €190 billion announced by president Mariano Rajoy’s cabinet.

Nevertheless, the IMF, also involved in this particular war of data, confirmed Spain’s financial system soundness last Monday. According to its next summer report, 70% of Spain’s financial entities are already restructured.

The CEEC’s analysis considers that the financial system has already provisions of at least €120 billion since the crisis began, which can be absorbed by the system itself at a very limited cost for the public sector. That would mean the sector could absorb €30 billions

“against its own capital generation, including loss and profit accounts in the next two years. On the other hand, the deposit and investment guarantee fund (FGD in Spanish) would also be able to absorb the same amount of some extra €30 billions.

“We estimate the gross cost for the public sector (except for the FGD) at about €10 billion to 20 billion (less than 2% of GDP), which does not involve a relevant impact in the total outstanding public debt”, remark the Spanish multinationals.

As far as the real estate bubble and its impact on the  financial sector is concerned, the Spanish companies’ report say that the housing stock will get balanced in three or four years, with approximately 250.000 units left compared to the current 680.000, as well as an additional correction in prices of 10% added to the 27% adjustment already made. According to Bank of Spain calculations, the country’s banks could deal with a loss of even 50% in residential property prices, given the provisions imposed by the lastest financial reform.

On grounds that Spain holds the lower ratio of public debt per GDP in the euro zone, a 68.5% against the over 80% of Germany, UK  and Italy, the report supports the idea that current risk premium level of around 450bp

“is not justified, neither because of size nor its composition, deficit, or potential growth.

The current risk premium is excessively punishing Spain three or four times more than France, and even ten times the UK.  So, the spread between Spain’s bond and the German bund

“should be near 150 bp, if it followed the pattern that historically has linked both figures with the countries’ relative fiscal position, the yearly growth gap, and also the stock exchanges volatility, measured by the VIX index.”

As for other aspects of the Spanish economy, the CEEC pointed out that the recession will bottom up in the last quarter of this year and so Spain will begin to recover in the first three months of 2013 thanks to the exports sector, which is the industry now leading the productivity model shift. It also is expected that labour reforms will help create 700,000 net jobs in the medium term. Of course, the big Spanish companies remind the importance of their international focus to prove their capacity to compete everywhere in the world.

Be the first to comment on "Is Spain’s risk premium being exaggerated? Yes, say the big companies"