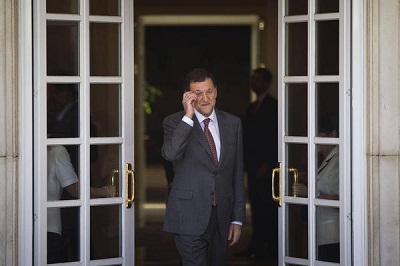 MADRID | The extensive sell-out on Friday shows the desperate situation Spain is facing. Shattered confidence on the government ability to overcome a looming crash landing, is sending shivers down the spine of investors. People are starting to bet Spain will be forced to bailout one of these days.

But, unlike other salvaged countries, its sheer size prevents a rescue package from providing a way out in soothing its woes. Euro coffers would simply prove unable to match the daunting challenge of keeping it away from financial markets till current budgetary discomfiture is tidied up. The more so as that move might drag Italy into a free-slide, blowing up to pieces euro zone chances for survival.

Considering potential solutions shows how dim prospects are to redress matters. Should Spain ask for limited intervention on its sovereign bonds to skip the untenable differentials, this low-key rescue would send shockwaves on private sector external indebtedness, ranking by far as the largest exposure. It would also wreak havoc on banking ability to borrow and lend, sending the economy into a free-fall. A full-scale bailout would neither work. It would erode creditworthiness of every Spanish asset, crushing any hope for firms to refinance their liab

how to get your ex boyfriend back

ilities. It would fuel fears on a default scenario, a prospect raising the borrowing costs beyond any sustainable level.

The harsh treatment inflicted on the Spanish economy to achieve a balanced budget leads to a self-defeating strategy. As the crisis deepens, public revenues will bear the brunt thus increasing the gap. Regional imbalances add extra financing requirements while social security comes under renewed pressure. Overall central government expenditure is expected to grow substantially next year dashing any hope to buttress public deficit. A deep-rooted recession offers little hope to save the day.

Spain claims it can resist the run up on interest rates till the end of the year. Its Treasury has already raised a comfortable firewall by frontloading up to 70% of its annual needs. Yet, should risk premium continue to climb it will be confronted with the risk of failing to convince investor to take up its paper, igniting the ghostly prospect of a potential default. Any slippage can turn to utter disaster.

Only an ECB decisive involvement could effectively check this landslide from happening. Only by forcefully acting in the sovereign market and providing massive medium term liquidity facilities to baking institutions, implosion might be avoided. But the ECB is showing no sign to be willing to perform such a job. It might move at the very end, should Italy spin-off control. Not before.