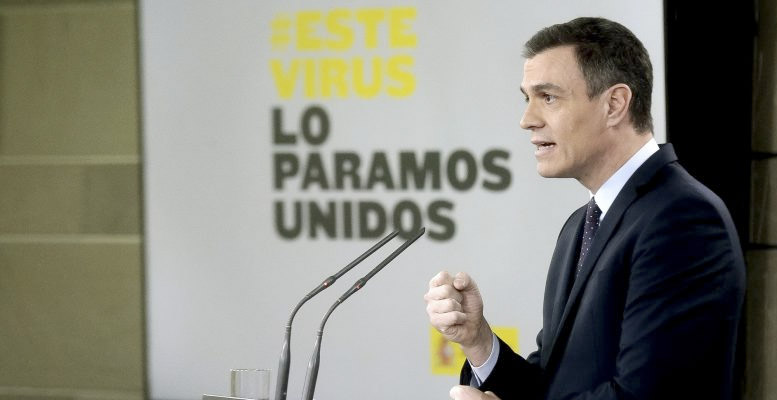 The current scenario forces stimuli and, at last, the Eurogroup is beginning to propose some important measures. These include the potential mobilization of 410 Bn € of the European Stability Mechanism (ESM), although no details have been given about how this would be done. So the big announcement from the meeting was the agreement to promote fiscal measures throughout the Eurozone worth 1% of GDP in 2020. This is in addition to guarantee schemes and tax deferral equivalent to 10% of GDP.

Spain’s Prime Minister, Pedro Sanchez, announced a much more ambitious plan, mobilising up to 200 Bn euros, of which 83 Bn euros will be private, mainly from banks. The shock plan is equivalent to 20% of the national wealth (11.7% taking into account the State’s share).

The programme’s key measures are vital guarantees such as a credit line worth 100 Bn euros. This could increase to 150-200 Bn euros if the private element is integrated.

In addition, large companies will be protected from hostile operations from outside the EU, while temporary lay-offs (the so called ERTEs) will be accelerated (they will be resolved in 7 days) and conditions improved. A moratorium on mortgages was agreed for several months, while energy, water and telecommunications services have been guaranteed for vulnerable consumers; and the right to a reduced working day was established for the care of family members. Furthermore, a specific credit line from state-owned bank ICO, worth 400 million euros, has been set up for companies and self-employed workers in the tourism sector, amongst other measures.

Intermoney says that this is, overall, an “ambitious plan of action which no doubt will spark some criticism amonsgst the more orthodox segments of the economy. That said, we cannot allow a scenario of social tension in the streets to add to our current problems.”

“Whatsmore, the measures were correctly focused on generating confidence in households with regard to their income and minimising the number of corporate collapses.”

However, the markets were once again concerned about the effect of these measures on Spain’s debt and they took our 10 year-bond to 1.024% (+19.1 b.p.). This is curious says Intermoney, flagging that “if these measures were not taken we would see a collapse in activity which would be difficult to resolve. And this would further complicate the possibilities of meeting our obligations.”

Pedro Sánchez also announced his intention to present a new General State Budget for “social and economic reconstruction,” once the coronavirus pandemic has been overcome. It will contain new projections for the macroeconomic situation due to the impact on the economy of the Covid-19.

The Prime Minister is taking into consideration that these new accounts will have to be elaborated within a new macroeconomic framework. They do not have this yet, but it will need to take into account the impact on the economy of the spread of the coronavirus.

In this regard, he highlighted that “no organisation” has these new forecasts, as it is “very difficult to assess the shock and consequences of GDP and job destruction” originated by this crisis. So he expects to have these projections “in the coming weeks.”

With regard to listed Spanish companies, as mentioned before, they will be shielded from a drop in their share price due to the coronavirus impact which would make them easy object for a takeover bid from companies outside the EU who could take advantage of this temporary situation.

In this context, investors residing outside the EU and the European Free Trade Association will not be able to hold “a stake equal to or greater than 10%.” Neither will they be allowed to take control of companies related to energy, transport, water, health, communications, media, data processing or storage, aerospace, defence, electoral or financial infrastructures. The government does not rule out extending the veto to other sectors. According to the analysts at Banca March, companies such as IAG, Repsol, Aena, Santander, Caixabank or Bankia are thus protected, given that they are losing between 40% and 60% of their stock market value.

Meanwhile in France, a stimulus package worth 45 Bn€ was added to the 300 Bn€ guarantees for business credit. This move was triggered by the government’s estimates in line with a 1% decline in the French economy in 2020. Furthermore, the French authorities have not ruled out nationalising big companies which are in difficulty. This is an option already being considered in Italy with Alitalia.

For its part, Italy approved a package of 25 Bn€ to alleviate the effects of the coronavirus. Of this total, 3.5 Bn will be earmarked to strengthen the health system and civil protection, which are the sectors managing this crisis.

Other noteworthy reactions from different countries to the coronavirus : The Prime Minister of Belgium has proposed aid totalling 1 Bn€ , while the UK has put £330 billion on the table to support companies and workers.

Meanwhile, the Federal Reserve continues to announce drastic measures to address the coronavirus crisis: it will resume its programme of buying up corporate debt, first implemented during the Great Recession. So the Fed will directly buy short-term debt from the companies that issue it. The White House will ask Congress to approve an $850 billion stimulus package to alleviate the effects of the coronavirus. The government will also allocate $50 billion to help the airline industry.

Yesterday, the ECB launched the first of the measures it intends to use to help curb the economic impact of the coronavirus on the Eurozone. It has proposed an unlimited three-month liquidity auction, in which European banks have requested 109.13 Bn€ of resources. It will be a first step in providing immediate funding to banks and protecting the stability of the money market.

Finally, the European Investment Bank has offered up to 40 Bn€ in funding, which could be mobilized “quickly” to help SMEs and mid-caps to combat the crisis caused by the coronavirus.