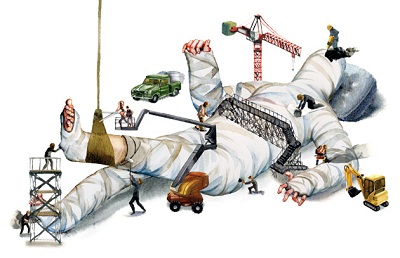 MADRID | Spain’s minister of Economy Luis de Guindos suggested, almost announced, without giving away much detail immediate reforms in health care and public education to adjust the final accounts of the State. The new austerity measures are meant to touch the very nerve in public spending since both departments sum up to one third of total government spending, apart from the pension system that belongs to another cash register.

The minister’s proposal looks set to save more by trimming services and citizen numbers with access than by changing into different mechanisms over fees or co-payments. It is an option. He seems to be trying to avoid the discussion over co-payments, which has become taboo and a sort of red line he can not cross for the sake of a troublesome ideological debate. This is absurd.

So the minister has pointed at the idea of ​​excluding individuals with high income from the public health system: they have more money, let them pay for the services.

The proposal deserves at least two considerations. First, it will turn out that they are the few and therefore their exclusion reduces public spending to a very little extent. The minister said high incomes are more those over €100,000. According to official data, the figure would be 250,000 people, and who incorporating other dependent family members may double the number to half a million. On a base of 45 million users of public health services, that means that half a million represents just over a 1%. The State is not going to get noticeable savings this way. In addition, many of those wealthy people are part of those who use private healthcare as an alternative.

Second. These high-income taxpayers, for the sake of a progressive system, are already the major contributors to the common cash register, so that discriminating against their access to services is a further punishment. That quarter of a million people means more than just the 1% of all taxpayers, as they contribute 20% of personal income tax revenue and more than 10% of paid VAT.

Be the first to comment on "Spain excludes the wealthy from public health services: a useless measure"