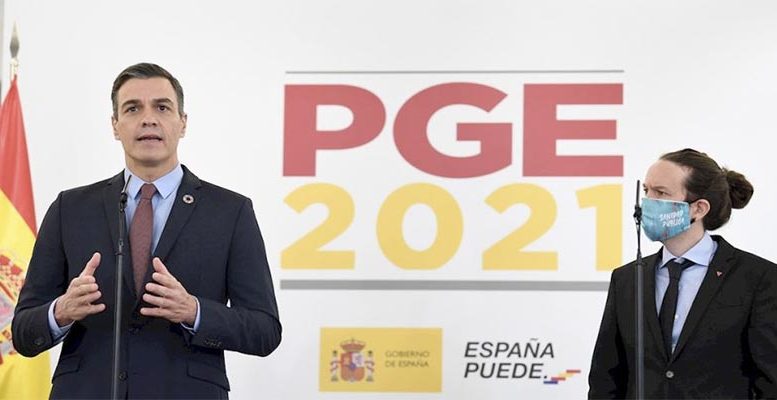 The President of the Government, Pedro Sanchez, and the Second Vice-President, Pablo Iglesias, presenting the proposed budget for 2021

The Council of Ministers today approved the draft General State Budget for 2021, following the agreement reached last night by the coalition government. The proposal will be focused on mitigating the effects of the pandemic’s effects with the largest public expenditure in history. This amounts to 239.765 billion euros – an increase of 10% – including an advance of 27 billion of European funds. Now the most difficult part remains: obtaining parliamentary support for the Budget.

The proposal will raise personal income tax for high earners, both for work and capital, and wealth tax for large fortunes. This was one of the main obstacles to agreeing on the budget project. The introduction of the measure – the president of the government Pedro Sánchez has given in to his coalition partner, Pablo Iglesias – has been instrumental in achieving the deal.

With regard to wealth tax, the Government will increase this by one percentage points for fortunes of over 10 million euros. Meanwhile it will cut the tax rebates on private pension plans. The amount of the reduction is still unknown.

The new budget also includes an increase in corporate tax for large business groups, while the exemptions for dividends and capital gains of large companies’ subsidiaries will be limited. In addition, a minimum taxation of 15% will be established for listed real estate investment companies (Socimis).

As regards expenditure, the Budget contemplates a reinforcement of the Health System with an investment of 151.4% over the current budget, which means 3.064 billion euros more. Some 2.440 billion will be earmarked for the purchase of vaccines and the reinforcement of primary care.

The budget also foresees the intensification of care for dependent persons, with an increase of 46%, 600 million euros. The rise in expenditure in this area is aimed at reducing waiting lists and improving services.

In addition, 700 million euros of European funds will be dedicated to improving care for the elderly. The objective is to move from a residential care model to a home care model.

Pedro Sánchez flagged that these accounts are “progressive,” which “in our opinion, our country needs.” The Prime Minister also highlighted that the new budget is the “key piece” for the economic recovery. It means leaving behind austerity and cuts, to give way to an “energy” and a “willingness” of the Executive to “move forward” after the pandemic.