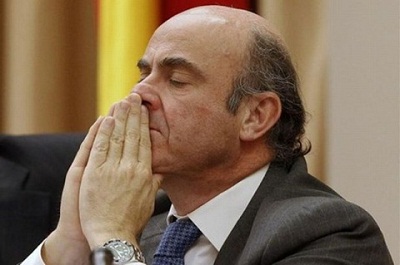 By Julia Pastor, in Madrid | Everyone's talking about it. The financial support demand or the bailout that Spain has requested from its European partners last weekend in order to, at last, recapitalise the country’s banking industry is admittedly one of the most significant episodes in Spain’s recent economic history.

After the International Monetary Fund published on Saturday early in the morning its stability report for Spain, Mariano Rajoy’s government asked the Eurogroup for a €100-billion aid package to clean up financial entities. The assistance represents 10% of the country’s GDP and will be implemented through a credit line only for banks in difficulties and via FROB (the Spanish Fund for Order Bank Restructuring), which will inject equity and convertible contigent bonds to the entities.

In principle, the conditions imposed by Europe will be confined to the financial sector, which will probably involve offices closings, staff cuts, assets and stake sales, and so on. The rescue does not involve political requierements, that is, Spain will not be demanded to perform any further adjustment plan, since it is not a national economy intervention, unlike the case of Greece, Ireland, and Portugal. Officially, it is a capital buffer to help certain entities, not to rescue a member State.

Because of the magnitude of the developments, Madrid-based financial experts have devoted their analysis largely to examine in depth its details as well as its significance. Conclusions seem to be unanimous: this rescue means good news for Spain, and also for Europe and the euro project.

According to Bankinter analysts,

“the credit line for Spain to reorganise its weakest entities means the removal from the economic scene of one of the two most strong doubts about Spain, along with the deficit compliance. Markets have been worrying about these uncertainties for a long time, so that the only burden they will have in the short term will be next weekend's Greek elections.”

The bank’s experts remark that the bailout formula is to assist just banks and not the whole of the economy. Therefore, conditions would be imposed by Spain's government on the assisted entities, not by the euro area on Spain. Furthermore, they think that the result

“may establish an assistance mechanism for entities within the European Monetary Union, which will enable markets to differenciate between Spanish 'healthy' banks (70% according to the International Monetary Fund) and the ones that are not. Lastly, Bankinter says that this event “opens the door for the building up of a Deposit Guarantee Fund that could be used for all the euro zone banks.”

Analysts at Santander focus on the fact that the credit line will not be given directly to the banking industry, but via the FROB. This is the reason why, in these experts’ opinion and despite minister De Guindo’s comments

“this credit line does have a direct impact over Spain’s public debt figures.” De Guindos stated that it would increase only in the interests payment. “Anyway, either by convertible contingent bonds or by equity, the net contribution to the Spanish government would be expectedly positive.”

IT'S ENOUGH MONEY, BUT ARE SENIOR BONDHOLDERS' PROTECTED?

Regarding the conditions for the banking sector, Santander analysts believe that

little possibility that they include loss absorption by bondholders. Considering the Irish case, and once the European Commission proposal includes bail-ins only from 2018, senior debt will be out of any possible write-down.”

Sabadell stresses that the total amount will be defined once the financial System's audits finish by July 31. According to the Catalan entitiy’s analysts

The interpretation by ACF of the agreement is also positive. Analysts give the following three reasons.

“ The credit line amount is more than enough to fulfill the capital deficit that we estimate at €56 billion, leaving a wide safety margin; macroeconomic severe conditions that could lead to the country's collapse will not be imposed, and finally the fact that part of bondholders might have losses would reduce public aid needs as well as the dilution for shareholders.”

THE GOOD BANKS, THE REST

Furthermore, they point out that  “it will be very important to diferenciate within the banking sector. In this sense, our order of preferente does not change: Santander and BBVA, and in the domestic banking segment Caixabank. The only medium-size entity outstanding positively would be Banco Sabadell.”

Alberto Vigil, expert at Barclays, also focus his analysis on Santander, BBVA and La Caixa, about which he thinks that

“they do not need an euro to be recapitalised, according to the the IMF’s stress test. How many banks in Europe or worldwide could pass an examination like that?  But, they are entities beyond these three banks. In reality, only Bankia, Catalunya Caixa, Nova Caixa Galicia and Banco de Valencia fail.”

CLOSER, FURTHER FROM THE UNITED STATES OF EUROPE

“the Eurogroup’s decision is the first really significant step for the
European financial integration. It is also an example of financial
solidarity, which sends the market a new message about the political consensus for the euro is firm. Also, the moment chosen to request the aid,  just one week before Greek elections, could not have been better.”

“The countries already intervened are wondering why they did not receive the same conditions, so Greece and Ireland may complain.

On the other hand, Finland and the Netherlands seem to be the countries which disagree the most about the announced formula, and would like Spain to deposit collateral; rating agencies usually downgrade the credit of countries that borrow money
from Europe, so it is possible we see Moody's cutting by one
additional notch Spain’s rating; some people at JP Morgan Credit
Department consider that Spain will probably receive a more complete assistance package by August.”

The Ibex35’s reacted inmediately to the rescue. Early this morning, the Spanish selective climbed by 4.50%, at midday it stabilised with an increase of 2.83%. At closing it stood up +1,24%. The risk premium was down this morning to 470 basis points, 20bp under Friday’s closing, but past 15:00 hours (Madrid time) reached 508bp.