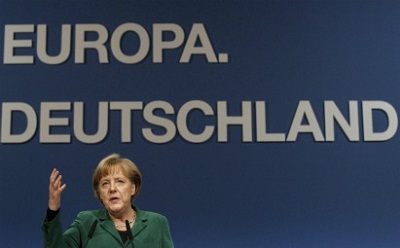 LONDON | Germany finally met its match in Spain. And the outcome of the clash, as for Monday's market reaction, was unsurprisingly ugly, leaving the future of the euro project in deeper waters than ever before.

Naysayers are meant to have a hard time running against the tide of general opinion, or so they were portrayed in the now past European political modern tradition. They were the protesters, the champions of alternative choices to the overly accepted and well greased system mechanisms. But the disastrous management of the credit crunch in the euro zone may force rebels and authorities to exchange places: euro policy-makers could become dangerous activists while eurosceptics would be the safe, reasonable bet. The scheme to inflate a €100-billion cushion for the Spanish government to fix the country's banking sector is one more wound inflicted to the common currency.

It had to be a stubborn, too-big-to-seize Madrid the one to trigger the debate that really matters, though. Madrid is not and cannot go down the Greek, Irish and Portuguese path without a fight. The official version of president Rajoy's government is that the Spanish economy retains sufficient strengths as to get through its recession tunnel and find the exit without being pushed around from Brussels. This capital lifeline just agreed will ring-fence companies and labour market from the contagion spread by rotten banks, which are 30 percent of the entire industry, nothing else.

Participants in the international financial centres accept the claim. In an investor note, Barclays Capital said today that

“A case can be made that the Spanish banks have loomed disproportionately large as a market concern. We do not, of course, take banking problems lightly, but our European economists and bank analysts have repeatedly reviewed the data and estimated that the magnitude of the problem is eminently manageable and, unlike in Ireland, quite unlikely to be large enough to destabilize the public finances.”

Days before the Spanish minister for the Economy Luis de Guindos struggled to announce the plan as a non-national but only-banking bailout, ratings agency Standard&Poor's had backed his calculations. In the worse scenario, S&P analysts How To Get Your Ex girlfriend Backstandardandpoors.com/ratings/rd_articles/en/eu?fgrId=973693&KeepThis=true&TB_iframe=true&height=356&width=640&modal=true” target=”_blank”>pointed out capital needs of €42 billion, and the agency confirmed Monday it would not revise Spain's investment grade because of the external support to its banks. It said, too, that there would be a 60 percent probability of a moderate GDP decrease of between 0.5 and 1.5 percentage points, instead of dramatic drops.

Yet, most City comments on Monday effortlessly exposed why the accord's positive effects were to be short-lived. In the words of Kames Capital fixed income manager Sandra Holdsworth,

“As always with policy actions in the European Union, more questions are raised whilst others are unanswered.

“The immediate implications for the banks in Spain are that this is good news as finally the problems of undercapitalisation, whilst loan losses are mounting, are addressed. But the situation for the sovereign and holders of Spanish government bonds it is less clear.”

That is one shady spot over the whole affair. There are more of them. For instance, markets will not know the full amount of the loan until consultants Roland Berger and Oliver Wyman, plus enlisted help of the International Monetary Fund, the European Central Bank and the European Banking Authority, assess the situation in detail. How many months will the waiting take? But then again, no one knows on what terms is the loan made and who is making the loan, either. European politicians would be advised not to blame investors for feeling disappointed at best, or simply angry.

Still, Spain's attitude has left most cards showing up on the table. As Chris Towner, director at currency specialist HiFX, put it today,

“this crisis has gone on long enough now for the EU to stop fudging solutions but now start to map out a plan on a union level. Union means being joined together and the EU will continue to have to throw money unless they solve the bigger structural issues of not having harmonised debt and leadership.

“The markets and indeed the euro have bounced somewhat sceptically to the news. The euro now at teenager age is somewhat bored bouncing on this trampoline of bail-outs and is looking for clearer direction into her age of adolescence.”

The Spanish government's defiance might go down in history as a mature stand. A debt is a borrower's as much as a lender's responsibility. Were Germany to respond unequivocally for once to the challenge, minister De Guindos would become the unlikely hero the euro so desperately needs.

2 Comments on "Frau Merkel’s not for turning, but neither seems to be Spain"