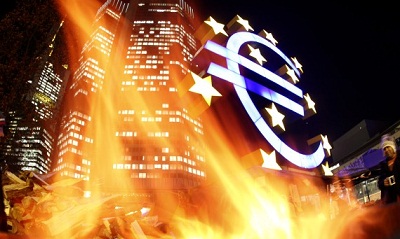 The Spanish tether already seems overstretched. On Monday, the national institute for statistics published fresh data confirming a forecast released days before by the country’s central bank, which warned of a contracting GDP: at -0.4 percent, records for the second quarter of the year were indeed 0.1 percent worse than for the first three months.

Private consumption and investment have fallen, year on year rates of industrial prices have risen by 2.5 percent and unemployment has reached a maximum level of 24.63 percent. The stream of news supporting the option of an imminent request of a national bailout is relentless. It brings no breathing space for this or the next year. The International Monetary Fund said Spain’s economy is set to lose 1.7 percent in 2012 and 1.2 percent in 2013.

Then, there are the omnipresent rumours that may or may not be credible, coming all the way from Brussels or Berlin to crash against Madrid’s tough wall of denials.

But despite that costs on international credit are somehow abating for Spain (and Italy, too), rescue plans are being studied by research teams in the financial City of Madrid. At one Spanish bank, Bankinter, analysts even noted today that the bailout should be put in place as soon as possible if the European Central Bank (ECB) isn’t to take action. Their contagion scenario, with a Spanish government not being able to finance itself on the markets, points out that capital needs could easily spike to €700 billion.

The ECB meeting on August 2 holds the key, as in other occasions, to offer the periphery some respite. For instance, Bankia experts reminded investors this morning that just by showing some determination, the ECB governor Mario Draghi cut Spanish spreads comparing to German bonds down by 100 basis points. It didn’t cost one euro, their report said.

Draghi has so far made no move, though, and the cards remain on the table. Among the several types of bailout that Spain could receive, the City of Madrid found one to avoid and one it prefers. Here are the reasons.

A rescue by loans to finance the Spanish public sector during a period of 18 to 24 months is a loser. It would be the sort of plan in which already Greece, Ireland and Portugal are involved. Spanish technical analysts agree this process would badly affect the country’s investment grade and oust the government from the markets. As a result, a second bailout would be needed and it would also trigger debt restructurings.

The best choice for Spain would be a rescue euro fund, either the expiring European Financial Stability Facility or its successor the European Stability Mechanism, buying Spanish sovereign debt on the secondary markets. The Spanish government’s access to the international markets wouldn’t suffer and the overall effort for its European partners would be controlled, the financial experts in Madrid say.

Politicians and central bank governors appear to have enough information by now to decide on what to do and when to do it. The saga, unfortunately, goes on and on.

Be the first to comment on "The best bailout for Spain"