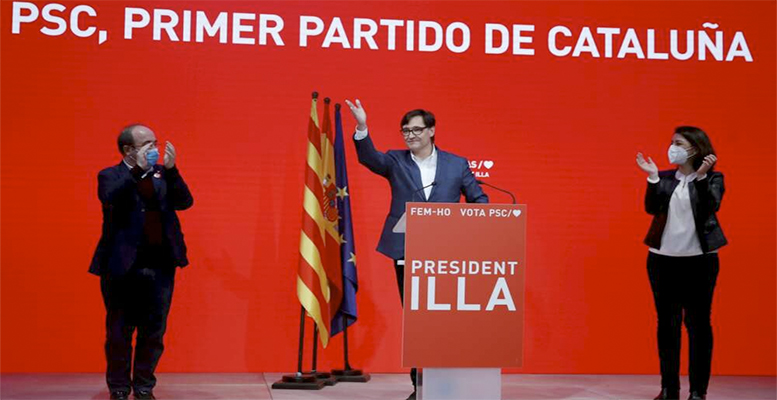 Before the pandemic, Spain’s biggest problem was Catalonia, its drift towards independence, the difficulty of reaching governance agreements with its main parties. Practically everything, economy, politics, social coexistence, revolved around the Catalan dilemma. It was expected that elections in Catalonia would clarify the region’s political future and bring some stability to the Spanish political scene. However, the results of the regional elections held yesterday failed to clear up the doubts of the last decade. The most voted party was the Socialist. It is true that this is a non-independent party, but the margin was minimal, and the sum of the Catalan separatist parties has obtained enough seats to form a government.

In fact, with 135 seats in the Catalan Parliament and 68 required for an overall majority, the PSC (Catalan Socialist Party) has won the Catalan elections in terms of votes. It tied with the Esquerra Republicana (ERC) with 33 seats, while Junts per Catalunya (JxCat) party won 32 seats and the CUP (extreme left party) won 9. This division of the pro-independence vote is a historic milestone, since never in the current democratic period have the republicans of ERC beaten either the conservative nationalists of CiU or their heirs JxCat in the autonomous elections.

The center-right Ciudadanos (Cs), who in the elections in 2017 was the most voted party with 36 seats – the first time a non-nationalist party won in Catalonia – collapsed with only 6 seats. The right-wing People’s Party (PP) won 3 seats. The big winner in this right-wing bloc, which has provided one of the big headlines of these elections, has been the extreme right-wing party Vox. With 11 seats, it enters the Catalan parliament for the first time and becomes the fourth political force in Catalonia.

Finally, Catalunya en Comú-Podem, belonging to the party that participates in the central government coalition with PSOE, kept the same eight seats it got in 2017.

Participation in the 2021 Catalan elections was just over 53%, the lowest in modern times.

Despite the fact that the pro-independence erosion has not occurred, the Socialists’ victory points to the opening of a dialogue with Madrid. In fact, the PSC candidate for the presidency of the Generalitat – the former Health Minister who has managed the pandemic, Salvador Illa – has announced that he will run for the investiture to make effective the “change” in Catalonia.