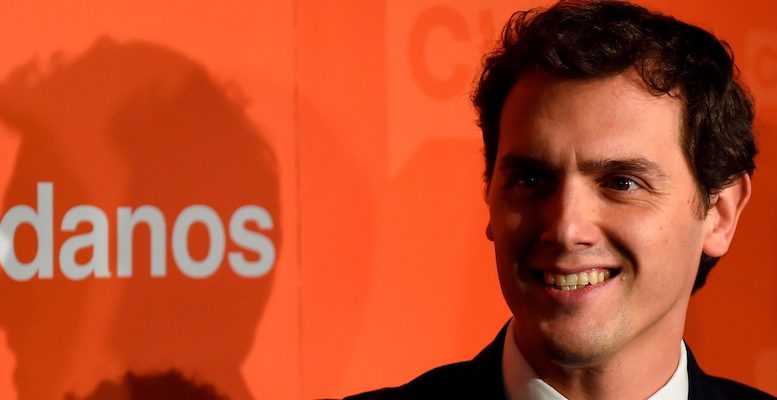 The fourth corner of Spain’s new political chessboard is called “Ciudadanos,” a social movement born in Catalonia 10 years ago and fostered by Catalan independence. Their slogans are: liberty, equality, laicism, bilingualism, Constitution. They elected Albert Rivera, a young lawyer from Barcelona, as their leader in a jam-packed meeting held in that city’s Tivoli theatre in July 2006. Rivera became involved in Ciudadanos thanks to Francesc de Carreras, his law professor at Barcelona University. The latter acted as a discreet mentor for the young politician who is now an oustanding party leader.

Ciudadanos has taken part in all the elections in Catalonia since 2006, winning increasing power in the Catalan parliament as well as in some city councils. In 2014, Ciudadanos participated in the European Parliament elections, offering themselves as an alternative national party to the existing bipartisanship. From that moment, Spain’s political map was transformed into a four-party model with each one having between 30% and 15% of the vote. This means that pacts between two or more parties is required to establish a sufficient majority.

Ciudadanos has wanted to position itself as one of the Europe’s liberal parties. And in fact it gained a place in this party in the new European Parliament, despite opposition from Catalonia’s Convergence i Unio party. Apart from being liberal, Ciudadanos also proclaims itself as being secular and constitutional, with a lot of social democratic bias in its social policy. It’s also a regenerationist party.

Its ideological position as perceived by citizens puts it near the centre, further to the right than the socialists but not so far as the PP. This allows it to form pacts with the two traditional parties, as happened after the regional and municipal elections. But they lack experience in governance and in public adminstration. Apart from their parliamentary activity, where they have basically been in opposition, they have not governed.

Their election manifesto, however, is one of the best prepared; they have had the backing of a wide variety of professionals, professors and top civil servants who have elaborated a panoply of realistic and ambitious proposals, including an economic summary for each of them which claims to support their viability.

Ciudadanos’ critics describe them as a “second brand” of the PP, or a party which has been promoted by big companies and has obtained a lot of funding to fuel its growth. But none of this has been proven, and it seems very unlikely with the information available. Ciudadanos has taken up space vacated by the PP, particularly in Catalonia, and the party is an alternative for centre-right voters scandalised by the corruption scandals weighing on the PP, with Rajoy’s passive indulgence. There is also no proof that they enjoy privileged sources of funding. They make do with official subsidies.

With its current electoral expectations in the polls, Ciudadanos is the typical party holding the balance of power which can go a very long way or not. It’s a party which is maturing, with weaknesses in its territorial structure, and with an abundance of leaders who have not yet been tested enough and have more of a future than a present.