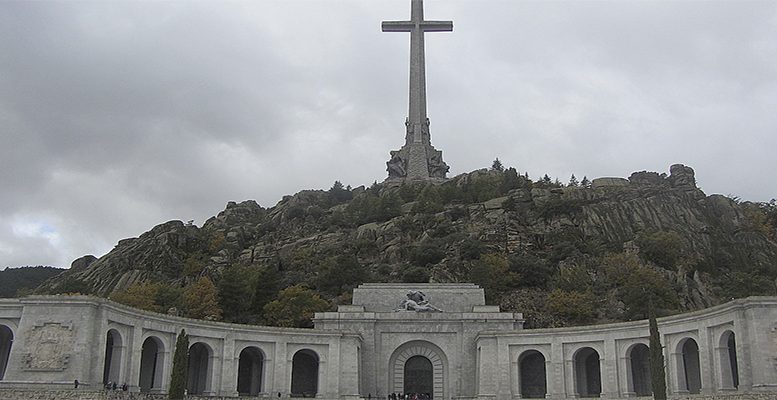 The Valley of the Fallen, where lie the remains of Franco

It makes for a good headline: “Spanish parties vote to exhume dictator Franco”. Apart from the implied drama of digging up a feared former ruler, those words suggest that there is now a consensus regarding the country’s historical memory and a willingness to act on it.

But it’s not quite as simple as that. On May 11th, Congress did indeed approve a motion, with 198 votes in favour, 140 abstentions and no votes against, to dig up the remains of Francisco Franco from his resting place, the Valley of the Fallen, and bury them elsewhere. That motion also called on the government to implement measures included in the 2007 Historical Memory Law, as well as setting up a truth commission to probe human rights violations of the Franco era.

However, the motion was not a law, with any binding effect and the government is not obligated to implement its recommendations. Given that the governing Popular Party (PP) was one of only two main parliamentary groups not to vote in favour – it abstained, along with the leftist Catalan Republican Left (ERC) which wanted the motion to go further – and has been deeply opposed to such initiatives in the past, it looks highly unlikely to act now.

Franco died in 1975, having ruled Spain since his victory in the 1936-39 civil war. After his death, the country modernised at incredible speed, transforming itself into both a powerful economy and an admired democracy. A cross-party pact not to use the civil war or the Franco years as a political weapon was a major part of that success.

But having been swept under the carpet of modernisation, 42 years on, Franco and his legacy remain a thorny problem.

Many Spaniards are bothered by several issues. Among them are the unmarked graves containing bodies of over 100,000 victims of Francoist repression across the country. Campaign groups carry out slow, painstaking work to identify these remains, allowing relatives of victims to give them a proper burial, decades later. But these organisations receive no state funding and the small budget attributed to historical memory by the Socialist government of 2004-11 was eliminated by Mariano Rajoy’s PP on coming to power.

Another problem is the Valley of the Fallen itself. A massive mausoleum north of Madrid, where a basilica has been drilled into the side of a mountain and topped with the world’s tallest stone cross, it is a place which does not merely commemorate the dictator but glorifies him. Symbols of his National-Catholic ideology – a Spanish cousin of fascism – abound there and, of course, Franco is buried inside the basilica.

Proposals for the Valley of the Fallen  – to turn it into a museum, tone down its more extreme symbolism, or simply blow it up – have circulated down the years, but an obsession with not stirring up the past and worries about the divisions that might be created has prevented anything being done about it.

Until now that is.

Although the recent congressional motion was not a law, it did reflect a shift. The congressional proposal, made by the Socialist Party, received the backing of the leftists of Podemos and the liberals of Ciudadanos. Both are relatively new parties which together have blown open the two-party electoral landscape which was forged in the early eighties and both are led by young men born since Franco’s death.

Those two parties are free of the baggage weighing down their two main rivals, although Podemos is much more committed to tackling historical memory than Ciudadanos. The Socialists, despite proposing this parliamentary motion, have been divided on this issue previously. Caught between their leftist republican roots and their role in the post-Franco transition to democracy, they have been reluctant to dig up the past with any vigour. And the PP, which was founded by former members of the Franco regime, has tended to be ultra-sensitive about the issue, quick to accuse those on the left who want to dig of seeking a belated revenge for losing the civil war.

But it was noteworthy to see the PP abstain and not oppose the motion to exhume Franco. In the past the party would have simply blocked such an initiative, but Spanish politics has changed over the last two years and in the process the PP’s parliamentary majority has been wiped out. That may not mean that this government is prepared to act on the issue – it almost certainly will not – but it does suggest it understands the tide has finally turned. When there is a change of government, Spain might finally see a change of policy regarding the Valley of the Fallen and the legacy of the man buried inside.