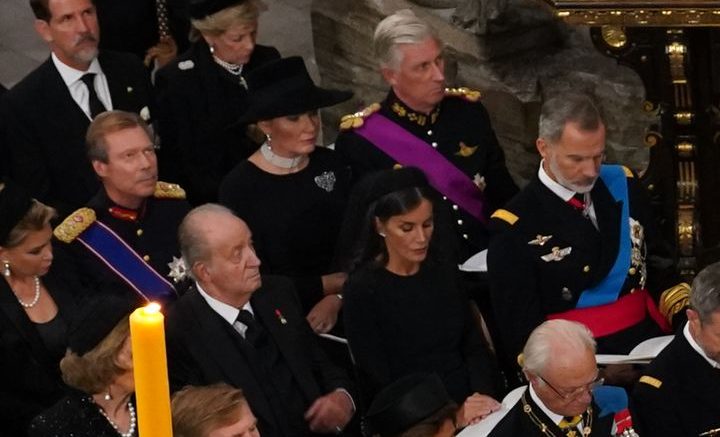 J.P. Marín-Arrese | The UK has delivered a humbling lesson to the Spanish government as its forceful attempts to downgrade the former King Juan Carlos’s attendance at late Queen Elisabeth’s funeral have backfired. The Foreign Minister stepped in, eagerly underlining that State representation confined itself to the sovereign and himself, even consigning Queen Letizia to oblivion in his hasty statement. His frantic efforts to portray Don Juan Carlos as an unwanted guest privately invited by the British led public opinion to believe the hosting arrangements would place him in a dim and quarantined corner at Westminster Abbey, far away from his son.

Events later proved such expectations equated to a diplomatic blunder. How on earth could any polite host place those holding the throne far from parents whose resignation allowed them to reach the highest hierarchy? Was it so hard to guess that former Queen Beatrix of Holland would sit close to her son? Were the Spanish government’s feelings so entrenched it forgot that protocol roughly amounts to the formal expression of good manners? Raising the stakes and focusing public attention on such a trifle issue has done little to serve King Felipe and the Monarchy.

Don Juan Carlos’s past conduct may rank far from righteousness. Yet, when it comes to mourning someone linked to him by royal and family bonds, it seems petty and shoddy to prevent him from paying his respects in full dignity. The more so when such plans utterly collapse after trumpeting them so loudly, leaving a bitter aftertaste.

For all the blame on Don Juan Carlos, he was the ruling King who secured the current democracy in Spain. He is also old and doesn’t seem in good shape. There is no compelling raison d’État justifying he should spend his last days far away from his country. In full discretion, the mainstream political parties should pave the way for his return home. The more so as when his passing comes, he will be entitled to full Royal mourning. An honour he deserves more than most of his predecessors.