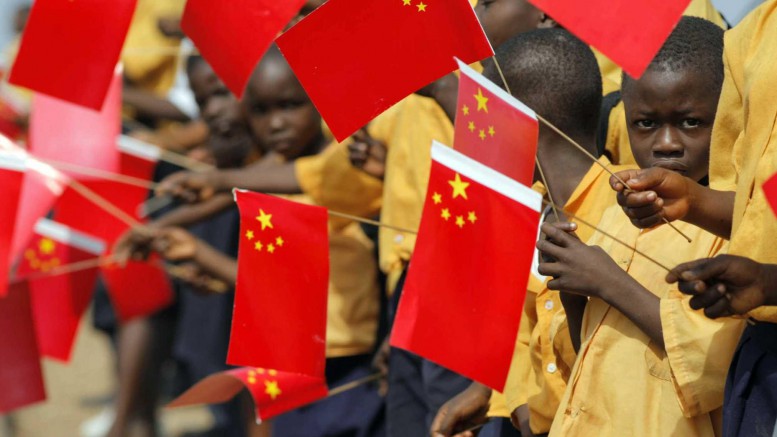 China has become Africa’s largest trade partner and investor. If Zheng He, the early 14th century explorer who commanded seven expeditionary voyages to South Asia and the Middle East, really did make it all the way to East Africa too, he would probably be really proud to see Chinese products being sold on every corner of Africa.

But I’m not sure that if Zheng could return to Africa today that he’d really feel comfortable there. As a journalist over the past five years, I have visited a dozen countries all over Africa. But though our goods are ample there, I do not feel a sense of equality and respect from the African people.

Since 2000, China’s trade with Africa has been composed of three parts: government assistance programs, investments led by medium-sized and large state-owned enterprises and non-governmental trade. This should have represented a golden combination because all of these have helped China become Africa’s biggest trade partner and investor. But there are serious problems with the relationship.

In China, people tend to be told only the positive aspects of China’s assistance to Africa. For instance, the Chinese government is particularly proud of the 1,860 kilometer Tanzania-Zambia Railway, and Africa Hall, the permanent headquarters of the United Nations Economic Commission for Africa.

But the other side of the story is that the railroad rarely functions normally. It has the world’s lowest punctuality record at around 10 percent. It is absolutely typical for a traveler to arrive at their destination 12 hours behind schedule.

Jean Ping, a Gabonese diplomat and former head of the Commission of the African Union, puts much more trust in his “distant relative” of France in terms of international actions than he does in China. This is despite the fact that he is half Chinese and regularly visits the country. French is his mother tongue, and the African governments he trusts still rely on French military protection.

Even more important, he has said that French businesses are the real pillar of Gabon, implying that the Gabon government is reluctant to let Chinese trade become something that would change their value system. China is but a measure that Gabon uses to counterbalance the power between it and France.

Compared with Chinese diplomats, African diplomats seem to have greater flexibility. On one hand, they successfully promote increased Chinese investment in Africa. But they are also constantly seeking ways to avoid any troublesome diplomatic commitments to China.

When the civil war was in full swing in North and South Sudan, ambassadors from both were busy lobbying in the Chinese capital. When Libya’s China embassy was changing leadership, state-owned Chinese television was still broadcasting live from Tripoli on the rebellion. Meanwhile, a man that other countries commonly recognize as an African dictator can be welcomed in Beijing.

Whether it’s state-owned enterprises or private companies, Chinese businessmen are often labeled “resource predators” or “environmental vandals.” Guangzhou, China’s southern boomtown, has become the largest Asian home for Africans, with some 200,000 native Africans living there. But when a traveler enters an African country holding a visa-free Chinese passport, customs officials are often rude.

Not long ago, I talked to a well-known French engineering consulting firm whose international headquarters is in South Africa.

“China undertakes a lot of projects in Africa, but rarely do these projects touch the ground deeply,” the company’s international manager told me.

What he meant is that bilateral relations between countries are not just about money or respect. What’s important is to share a certain common value system with African countries, which is unfortunately missing in China today.

This French company has been involved for nearly the last four decades in the national programs of a dozen sub-Saharan countries. These programs focus on unemployment, sustainable urban development and domestic stability. These are the three imperative conditions for a good national construction plan, whether it’s for an authoritarian regime or a democratic government.

It can take 10, 20 or even 30 years to undertake a project. For instance, the French company planned a community building project in Gabon in detail – comprising factories, transport and toll stations, and even the number of jobs that could be created over 50 years, along with medical facilities and a cemetery.

The program brought not only economic growth for the local government, but it also did not disturb the life of the locals. Their lives continued to improve while their employment increased steadily. As a result, even the French engineers involved in the design of the community choose to settle there.

Of course, the French company complains that their engineering “efficiency” can be instantly killed by the Chinese. Whereas a project could take up to 30 years for them, a Chinese company might finish the job within three months. The problem is that afterward it will probably take 30 years – or an eternity – for the locals to sort out the mess the Chinese “high- efficiency” style created.

Just as the French manager says, Chinese efficiency rarely considers the integration of local culture or sustainability. Typically, when a Chinese company wins a contract, an army of Chinese workers arrive. A few months or a few years later, officials from the two countries will cut the ribbon. Then the Chinese will disappear. Once problems inevitably appear, there are no drafts or documents in the local language, or any local engineers involved in the project, so that they are often completely abandoned.

I’ve tried to reason that China has no idea about integration perhaps because it has never been a colonizer in Africa. The French businessman countered that Zheng He wasn’t a colonizer either, yet he managed to teach some Africans shipbuilding, weaving and even the use of paper. Many Africans still claim to be Zheng’s descendants. What they obviously don’t know is that Zheng was a eunuch.

*Zhou Xin is a journalist in Beijing

Be the first to comment on "China builds in Africa, but the foundations are shallow"