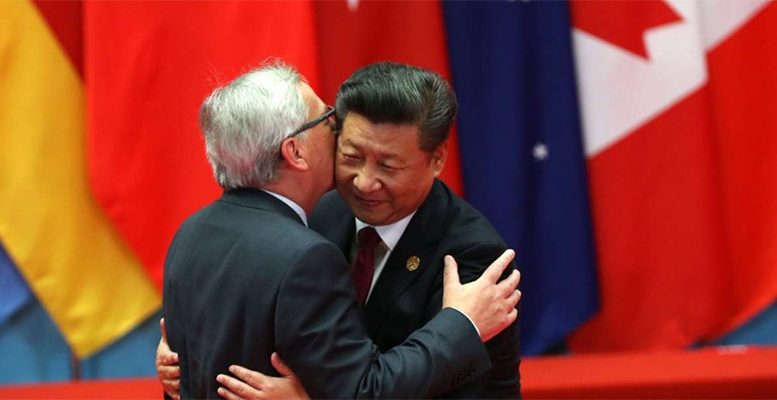 Hans Dietmar Schweisgut via Caixin | There has been quite some noise recently about EU-China trade relations, including frustration at the slow pace of market reforms, accusations of protectionism, calls for reciprocity, debate on industrial overcapacity, investment screening systems, and cross-border acquisitions.

As major trading partners, engaging in almost 1.5 billion euros ($1.65 billion) worth of trade every day, it is vitally important that we tend to this relationship that creates growth and jobs for both our economies.

The EU welcomes foreign investors with wide market access and an investment regime that treats EU and foreign companies equally. Chinese investors have been able to buy 100% stakes in EU car companies, banks and other key industries, while this would be impossible for European companies to do in China due to market-access restrictions and forced joint-venture requirements. There is clearly a lack of reciprocity here, which cannot go on indefinitely.

In a recent survey, 56% of EU companies said they would be interested to invest more in China if wider market access were granted. EU businesses feel less and less welcome in China and continually indicate that the business environment is worsening.

Given all of the above, it then seems somewhat unreasonable that the EU is accused of protectionist tendencies when, for example, European Commission President Jean-Claude Juncker announced recently a new EU-wide investment screening system. Every major economy has such a system in place already, including the U.S. and China. In fact, 12 EU member states already have their own investment screening systems.

Juncker’s proposal would merely seek to harmonize these across the EU and bring greater transparency and predictability. The aim is to protect EU security and public order, which is in line with international practice. But Juncker’s speech was about much more than this; it was also about structural reform at home and abroad, and an ambitious agenda for open, rules-based and fair globalization. The EU delivers in its many ambitious bilateral trade agreements; its WTO credentials are widely recognized. The EU seeks partners, and the EU wishes for China to be such a partner in the spirit and practice of true openness.

Since the third party plenum all the way back in 2013, much has been promised in terms of wider market access and deeper market reforms. In January, Chinese President Xi Jinping himself made a stirring speech in Davos in favor of open markets and globalization. Promising announcements have been made in State Council documents No. 5 and, most recently, No. 39. Despite all this talk for many years, progress has been so slow that EU companies are now suffering from what they call “promise fatigue.”

We hope that China’s forthcoming 19th Party Congress will speed up implementation of market-oriented reforms, bringing China’s policies into line with its vision of an open, rules-based and fair global economy. One clear way for China to demonstrate its commitment would be to make concrete progress in negotiations on the EU-China Comprehensive Agreement on Investment. An ambitious agreement would provide not only the necessary investor protection on both sides but also wide market access, thus harnessing the true potential of our economic relationship.