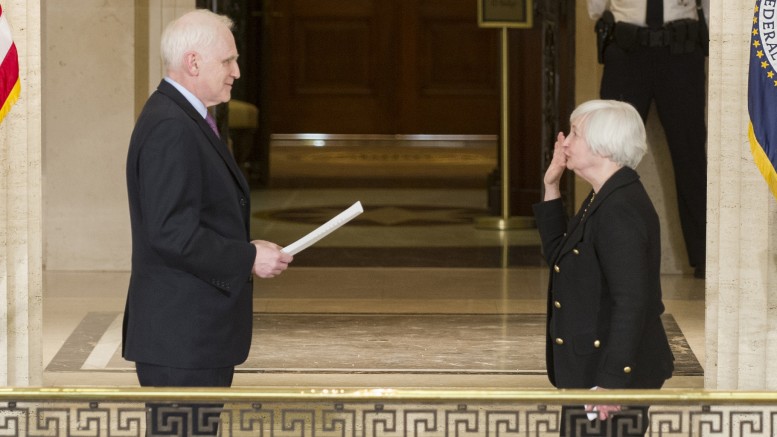 Fernando Barciela | The Federal Reserve’s minutes which were released last Wednesday show that a rate hike is firmly on the cards for this December. But almost everybody seems to think that – if it happens – the rate increase probably will be small, a quarter of a percentage point at most. And, very importantly, that the pace of additional rate rises will be gradual. Before any further decision on future hikes the Fed will want to study the consequences.

Analysts agree that we will probably not see very high rates in the end. Willem Buiter, Citigroup’s chief economist, told CNBC Friday: “We may be at barely 1 percent by the end of 2016 and I don’t think that in this cycle we are going to see 2 percent.” He also said that global central banks will “at best” move benchmark rates back up to 2 percent, whereas historically a normalization would have seen rates above 4 percent.

The markets reacted very positively to the release of the minutes. The Dow Jones surged more than 240 points. One main reason for this positive reaction is that the Fed reiterated that the pace of rate hikes will be “gradual.”

So, although analysts expect the stock market to falter when the Fed actually takes action, they think it probably won’t be a major setback. It would be very different if people saw this hike as the start of a series which would increase interest rates fairly quickly. That could indeed have a significant negative impact on the economy.

Anyway, it has to be said that in the U.S. most financial people don’t see a clear need for a rate hike just now. Some even fear that it could be bad for the economy and hamper the rebound from the recession, a recovery that’s already slow. These folks worry that the economy might continue to slow, given the weak data. A particular concern is that employment growth might be tailing off and labour markets haven’t yet fully recovered.

Given the economic deceleration over the past year or so, they believe the Fed would have already renewed stimulus measures. They think the Fed should hold off for a bit longer. Inflation isn’t a problem, as it is below the central bank’s own target of 2 percent.

Another point is that household debt is now very high, which could create problems. This climbed by $212 billion to $12.07 trillion and mortgage debt surged $144 billion, registering the second biggest rise since 2007. The same with auto loans which climbed for the 18th straight quarter.

The advocates of the hike, namely the FED itself, maintain that the decision to raise interest rates “may well be appropriate,” pushing these back up to more normal levels. Also Fed Chair Janet Yellen has stated that the economy is performing well and is in a sustainable uptrend.

The Fed’s minutes say household spending and business fixed investment increased at solid rates. Some economists have highlighted that job creation bounced back strongly in October. The hike would be very positive for the financial sector. Banks and insurers, particularly, would bounce back quickly because they make more money if rates are higher than they have been.

Fed vice-chairman Stanley Fischer recently suggested that the question is whether Asian emerging countries, and in fact the rest of the world, is sufficiently prepared  for such a decision. That said, some emerging countries and other central banks have been telling the Fed to “just hike rates.” This shows that many of them are already equipped for it.

And for the Fed, after months of promising to raise rates and not pulling the trigger, there is no other way out than to make that final decision. The Fed has lost credibility this year.

Insiders say the discussion seems to have shifted from the risks of increasing rates to the risks of not doing so, and that a decision to defer firming up policy could be interpreted as signalling a lack of confidence in the US economy.

And finally, the most important point is that a (slight) rate increase would certainly not be a surprise. Nor, the data suggests, a problem.