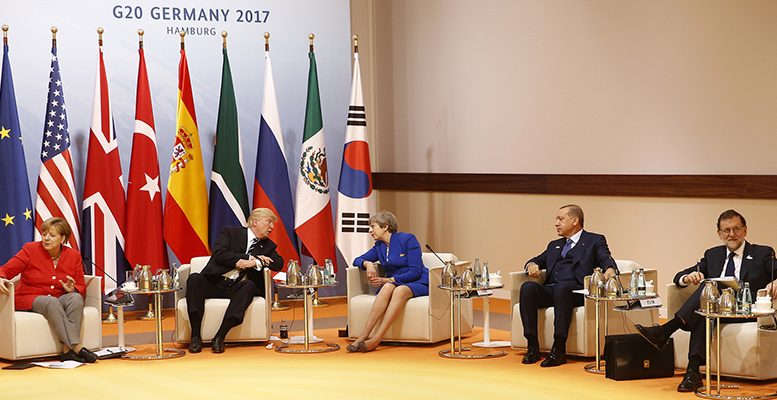 The G-20 Summit in Hamburg has shown how useless this gathering has become nowadays. Its contribution to world policing stands close to zero. No wonder. Its leading country openly challenges other partners on trade or migration issues while enforcing a wavering and unpredictable international line of action. The Trump administration utterly fails to provide any clear guidance. Its views clash with the principles and values of the US closest allies, while those in front fear its U-turns and volatile approach to sensible topics. Lacking any firm idea, other than unreasonable and biased predispositions, it proves unable to exert leadership playing a destabilising role instead.

For all the efforts deployed by the hosting Chancellor, the Summit has produced more rhetoric than real comfort. Words cannot salvage the Paris climate deal when the key player has walked away. Pledges to press for free trade seem pointless when the US has broken agreements and talks, intending to raise new barriers. Brokering loose commitments on such an uncontroversial issue as fighting terrorism, stands as a low-grade achievement.

The only positive outcome emerging from the meeting was the opportunity it provided for enhancing personal relations and overcoming mutual grievances. Mr Trump excelled in this job when meeting Mr Putin. While being forced to address concerns over Russian meddling in his election, he hastily accepted the denial tabled by his counterpart and readily turned to find common understanding over the Syrian civil war.

Mr Erdogan also played down past clashes with Ms Merkel, all too eager to overcome tensions with his primary partner in Europe. He has much to lose engaging in a tug-of-war with Germany. The Chines leader and his host closed ranks in the face of US trade threats. Ms May’s entourage boasted she exploited the opportunity for reinforcing her tarnished authority back at home. Yet, little proof emerged to support that claim. As for the Mexican president, he was all too happy having survived a tête-à-tête with Mr Trump apparently unscathed.

If the G-20 becomes a mere social event, it should aim at finding welcoming and joyful surroundings to meet. Undoubtedly, Hamburg proved a wrong choice.