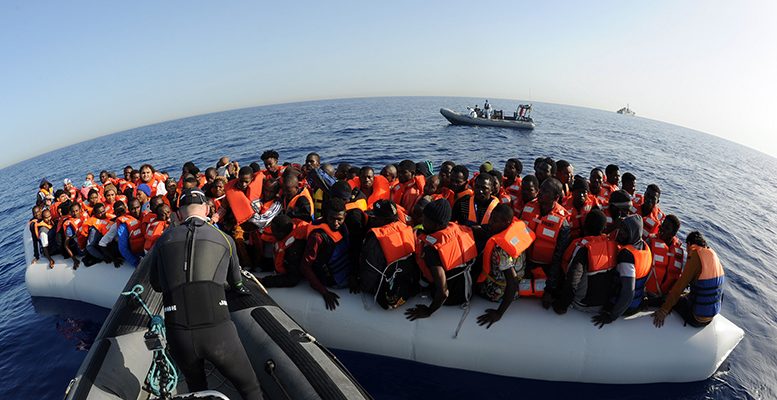 Migrants in a boat trying to reach the coast of Italy

Diego Chaves & Olivier Lavinal | On June 20, we celebrated World Refugee Day. This was an opportune time for us all to pay attention to the challenge of forced displacement today. Strikingly, the world is facing the largest forced displacement crisis since World War II, with nearly 80 million people having fled their countries because of persecution, conflict, violence, human rights violations or events that have seriously disturbed public order. All continents now face forced displacement crises, and migratory problems cross state and community boundaries.

Forced displacement has hit Latin American and Caribbean countries particularly hard, highlighting existing vulnerabilities such as increased levels of violence and, more recently, the COVID-19 pandemic. Latin America is now home to one of the largest forced displacement crises in the world. As of March 2020, more than 5 million Venezuelans were reportedly living outside of their country, with 4 million of them in other Latin American countries: Colombia (1.8 million), Peru (1 million), and Ecuador and Chile (for a total of 1 million).

Since the beginning of the Venezuelan crisis, most Latin American nations have tried to accommodate these recent arrivals, providing migrants with basic education, emergency health care services and legal status. These neighboring countries have provided a global public good by hosting millions at the risk of overwhelming their services and systems. But how will these nations be able to withstand the pressure?

Hosting countries face the new challenge of integrating larger numbers of migrants and refugees while dealing with the effects of the coronavirus outbreak. When taking into account that more than 60% of Venezuelan migration in Latin American countries is irregular and targets the most vulnerable populations, this crisis is now becoming a question of public health and safety and, ultimately, of regional security. It is time for the international community to provide a collective response that matches the magnitude of the crisis.

A first step was taken on May 26, with the virtual — livestreamed on YouTube — pledging conference for Venezuelan refugees and migrants that helped raise $2.79 billion in total commitments. This included $653 million of grant funding for the Refugee and Migrant Response Plan, which is a United Nations’ appeal to largely address the emergency needs of the migrant population.

The situation in Latin America calls for enhanced international support across the humanitarian-development nexus. In other words, the response should address pressing immediate needs —such as temporary shelter and emergency medical services — as well as the medium and long-term imperative of economic and social development through institutions, resilient local systems and service delivery. This is precisely what Colombian President Ivan Duque called for when advocating the shift from “emergency response to medium and long-term development and integration.”

To help countries mitigate the impact of the crisis and charter a pathway to growth and stability, there are five development priorities to focus on.

Colombia, Peru and now Ecuador stand out for their ambitious regularization programs for hundreds of thousands of irregular refugees and migrants. Amid rising public anxieties over migration in some countries, it may become harder to implement such mass regularization programs or offer regular status to most who seek to enter. The approach followed by Colombia in providing regular status to those who have employment in specific sectors may provide another alternative. Similarly, Peru has been trying to regularize students in the country’s educational system — another strategy that Colombia and Ecuador seem likely to adopt in the future and one that may prove more politically viable in some countries.

Yet these approaches risk leaving out the vast majority of recent refugees and migrants who do not attend school or work in the formal economy, or the families of those who do benefit from such measures. Policymakers should, therefore, be thinking about the medium and long-term effects where providing legal status to refugees and migrants would produce optimal labor market outcomes — for themselves and the country overall. The details of implementation in each case will matter enormously, but there is room for reiterative efforts that focus on specific different groups over time.

Second, health care barriers should be tackled through clear policies on access and financing. Almost all countries in the region, at least in theory, offer emergency health care to immigrants regardless of regular status. Still, specific policies are often unclear, and measures are not always implemented effectively at the local level, which means that migrants often have difficulties accessing health care in practice. In countries where local and regional governments pay part of health-care costs, financial burden sharing is also often unclear, leading local hospitals to cover costs that may never get reimbursed.

Creating clear policies and procedures defining both the services offered and what amount of costs will be covered and by whom are critical. In some countries, such as Colombia, Peru and Costa Rica, where residents need to enroll in the health care system to be eligible for benefits, it is vital to find agile ways of ensuring that new immigrants can register and sometimes to find ways of covering the costs of their care.

Third, access to education should be improved through flexible enrollment practices and ongoing support. One of the most critical decisions of countries has been to offer primary and secondary education to all students regardless of their status. In some countries, this was already embedded in the constitution, but others have more recently adopted these measures.

This helps avoid a generation of young people growing up without education and supports receiving countries to take advantage of the potential human capital of immigrant children who will likely grow up in their territory. In many places, however, strict registration requirements involving documents that are difficult for migrants and refugees to obtain can prevent some from enrolling their children in school.

There is also an urgent need to work with schools on policies, procedures and curricula to facilitate the integration of Venezuelan children, who may face challenges adapting to their new schools and need additional support to develop critical skills (e.g., history, culture and other country-specific knowledge). In several countries, access to college, graduate education and trade schools is also restricted for those who do not have adequate documentation, which risks wasting the human capital of immigrant youth who aspire to enter professional and technical careers, including in fields that are in demand in their new countries.

Fourth, migrants’ skills should be unlocked to boost labor market integration and local economies. The majority of Venezuelan adults suitable for paid work in countries across the region were already working before COVID-19. In fact, more than 90% of Venezuelan migrants in Peru and 8 in 10 Venezuelan migrants in Colombia were employed before the pandemic. While recognizing that the labor markets of many countries in the region are characterized by a high degree of informality, care should be taken to ensure that immigrants do have pathways to better-paid and more stable employment in the formal economy and to avoid creating conditions where employers can pay immigrants less than the prevailing wage, to the detriment of both newcomer and native-born workers.

There is no more important determinant for long-term positive labor market outcomes than ensuring regular status, which helps immigrant workers improve their wages over time and also helps avoid unfair wage competition between native-born and Venezuelan workers. Refugees and migrants tend to be relatively well-educated, which means that there is a wealth of highly skilled human capital that could benefit receiving countries.

To effectively leverage this potential, countries will need to create agile ways for immigrants to get professional and technical degrees earned in their home countries validated and recognized by employers. Argentina has done this through provincial universities, which has allowed the country to encourage professionals to leave the capital and settle in other provinces where their skills are in demand. Creating expedited credential recognition pathways for applicants willing to settle in an area of the country where their skills are most needed could also help fill labor market gaps.

Fifth, constructive narratives about immigration should be developed to highlight opportunities while not ignoring its challenges. There is no question that the sudden outflow of 5 million Venezuelans constitutes a migration crisis, and one that host countries are keenly aware of. But this migration is also an opportunity for host countries, as illustrated by increased predictions by the World Bank of regional future economic growth as Venezuelan immigration drives labor market expansion.

Immigrants, when they have access to legal status, education, health care, financial services and pathways to validate their studies, tend to become net contributors to innovation, entrepreneurship and economic growth over time. Several governments in the region have gone out of their way to maintain their focus on these long-term opportunities, even while dealing with the challenges that the sudden arrival of so many people creates for already overburdened public services. Policymakers require assistance to orient the public debate on migration by keeping an eye on the medium and long-term benefits (and designing policies to help attain them). Still, they must also acknowledge the real strains involved in dealing with sudden, large-scale inflows.

This requires moving from emergency responses to long-term development and integration. While there is still a critical need for emergency services for recently-arrived migrants from Venezuela, as crises in these countries stretch on, it is also important to plan for the medium and the long term. The most important question in the future will be how to support inclusive development that can help host communities and immigrants build connections and improve their livelihoods together. Enhancing access to and quality of schools, health care facilities, housing and urban infrastructure in areas where migrants settle is vital. This is the key to successful integration and also an opportunity to turn a migration crisis into a net benefit for host societies.

While there is some need for temporary shelter and emergency medical services that international actors could help meet, the greatest needs for support have to do with building local capacity for integration and service provision both to new arrivals and long-time residents. For this, multilateral organizations like the World Bank should continue to be actively engaged in helping better manage the forced displacement crisis, in support of its mission to reduce poverty and contribute to achieving the UN Sustainable Development Goals.