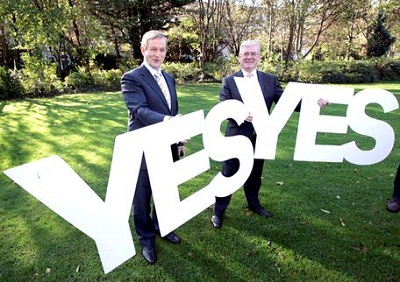 MADRID | While in Spain the formalities for the approval of the European Fiscal Treaty that was agreed last month by 25 countries of the EU are being carried out virtually unnoticed, Ireland announced February 29 that it will submit the matter to referendum. Despite this display of democracy, it is precisely just a display. Under no circumstances would Dublin’s ‘No’ paralyse the entry into force of the pact because it only needs to be ratified by 12 countries.

Also, the news is surprising because the date set by Angela Merkel for countries to give their approval to the treaty is March 30.

This is how the Spanish press covers the matter. According to El Pais, the Irish government made this decision after receiving advice from the Attorney General’s Office, which considers that given the changes implied by this new agreement at the European level it needs to be put to referendum.

As a reminder, let us bear in mind that the so-called fiscal pact (although its formal name is ‘Treaty on Stability Coordination and Governance in the EMU’) requires signed in countries to include in their Constitutions or in an equivalent national law a structural deficit limit of 0.5% and contemplates automatic sanctions for those countries which exceed the 3% set by the Stability and Growth Pact. It also gives a country the possibility of suing another member in the European Court of Justice if the latter fails to stay within these parameters.

So entering this ring is not a light step to take, and a referendum means everyone should be aware of it. Enda Kenny, Irish Prime Minister is confident that

“when the importance and the merits of this agreement are explained to the Irish, they will strongly support it by voting ‘yes’ to recovery and economic stability.” Indeed. In the case of Ireland, the greatest risk of not signing this agreement comes from a different angle: El País notes that euro zone members agreed that only the countries who ratified the agreement could receive support from the European Stability Mechanism (ESM) which is the permanent rescue fund that has a capacity of €500 billion.

Ireland, a country that has had to be rescued, could not receive further aid unless its citizens say ‘Yes’ in the referendum. So far, this is the only country that has announced it will submit the ratification to referendum, but Spain fears this decision could push other states to do the same; for example, Denmark.

The newspaper El Mundo adds that in the past, this legal mechanism of submitting EU pacts to referendum has caused serious headaches to Dublin and Brussels, and has resulted on several occasions in paralysis after the Irish rejection at the polls.

The track is not hopeful. The Irish electorate rejected in a referendum in 2008 the Lisbon Treaty, but a year later they gave its ‘yes’ to a revised text. The same happened in 2002, when the Irish approved the Treaty of Nice at the polls after it had been rejected a year earlier.

And if the nationals newspapers in Spain are a faithful reflection of the peripheral crown’s mood, southern Europeans would rather get on with the urgent fiscal convergence plans than spend another year in limbo.

Be the first to comment on "The Irish referendum, as seen from Madrid: don’t be trouble, get in!"