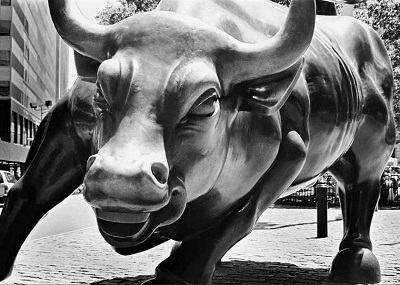 LONDON | The US 2012 election result can do little to change the fate of Wall Street under the extreme pressures of a global credit crunch and a relentless economic crisis. In a paper issued Monday by JP Morgan Asset Management, the investing company said that the financial sector will likely shrink after having become quite large a share of the country’s economy.

“One side effect of that process, lower secondary market trading volumes and bank withdrawal from some business lines, may create in some markets a persistent discount available for capture by investors willing to give up some liquidity,” Michael Hood, executive director of institutional market strategy noted.

The 2012 presidential election naturally looms large as investors consider the outlook for the United States, but JP Morgan remarked that the medium-term forces that will shape the economy do not necessarily depend on the outcome of this year’s vote. The partial demise of the financial services sector would be a footprint of the current market turmoil that will not go away.

On the other hand, the US may be experiencing a revival in the long-slipping manufacturing sector. A possible rebound in this sector would help create a more diverse set of jobs in the economy, possibly in the process providing a tailwind to small-cap equities as new supply chains appear, according to JP Morgan.

The research paper, though, warned about the ageing of the US population, which would carry significant implications not only for fiscal policy but also for economic growth. The labour force is likely to expand more slowly in the future.

“We anticipate a potential one-off boost as workers who left during the recession re-enter the work force. Yet, this does not translate into a steady rise over time. A burst of technological change in the coming years could serve as an offset to the sluggish rate of labour force growth. Without such a development, never easy to forecast or even spot as it happens, the economy appears to face a lower speed limit on growth in the coming years than investors were accustomed to in the past.”

Regarding fiscal policy, the paper indicated that it is time the US administration begins to consider the subject of austerity. In fact, a failure of the next US president to make choices in the near term could lead to excessive tightening as early as 2013, severely damaging expansion hopes. Though the US seems unlikely to run into a financing wall anytime soon,

“for 2013, Washington will need to strike a balance between the need for medium-term adjustment and the economy’s vulnerability to excessive tightening. Without this balance, a tight fiscal policy and the possibility of a very rapid adjustment will continue to restrain growth and bond yields for a while.”