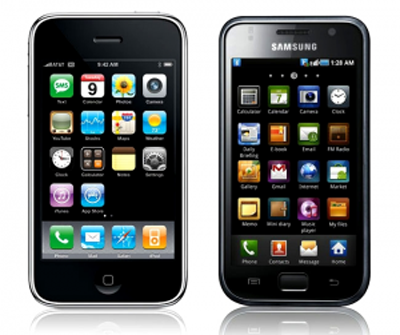 Apple-Samsung war is far from over. Steve Job’s company got what it wanted from the jury -more than $1 billion- but it’s still fighting to get a ban on eight models of the South Korean company’s smartphones, including its Galaxy S devices.

This is how the two giants, which once played as friendly competitors, have reacted:

Apple: “The mountain of evidence presented during the trail showed that Samsung’s copying went far deeper than even we knew. The lawsuits between Apple and Samsung were about much more than patents or money. They were about values. At Apple, we value originality and innovation and pour our lives into making the best products on earth. We make these products to delight our customers, not for our competitors to flagrantly copy.”

Samsung: “Today’s verdict should not be viewed as a win for Apple, but as a loss for the American consumer. It will lead to fewer choices, less innovation, and potentially higher prices. It is unfortunate that patent law can be manipulated to give one company a monopoly over rectangles with rounded corners, or technology that is being improved every day by Samsung and other companies. This is not the final word in this case or in battles being waged in courts and tribunals around the world, some of which have already rejected many of Apple’s claims.”

Indeed, Samsung lawyers will ask the judge to reverse the verdict, claiming it’s practically impossible for the jury to make a reasonable decision within only three days of deliberation. They insist the case will hurt the entire smartphone industry.

It’s interesting to compare South Korean and American media’s positions on this issue. The Korea Times wonders whether the jury managed the case properly.

“The jury was confronted with hundreds of questions on a 20-page verdict form that was more complicated than a U.S. tax return. They had in the jury room more than two dozen electronic devices at issue, 12 patents to decipher and 109-pages of instructions from the judge on rendering a verdict,” the daily said in an op-ed.

Samsung is the largest manufacturer of Android devices. For this time, it has largely enough money to deal with the fine: it earned $12 billion last year and has $14 billion in cash in the bank. But will this damage Android’s momentum on the market? Are consumers going to suffer?

The timing of the verdict is particularly tricky for the smartphone industry because Apple will soon unveil its iPhone 5. Asian companies such as Hong Kong’s ZTE or Taiwan’s HTC that are trying extremely hard to get a piece of the cake saw their shares fall on Monday.

“In general, it seems the Android camp is losing the patent wars,” says Dennis Chan, an analyst in Taipei with Yuanta Securities, quoted by Bloomberg.

Who wins? Chinese brands such as Huawei can have a shot. It’s good for them that Samsung gets a bump on the road. And since they are playin the low end, Apple is not worried. At least for now.