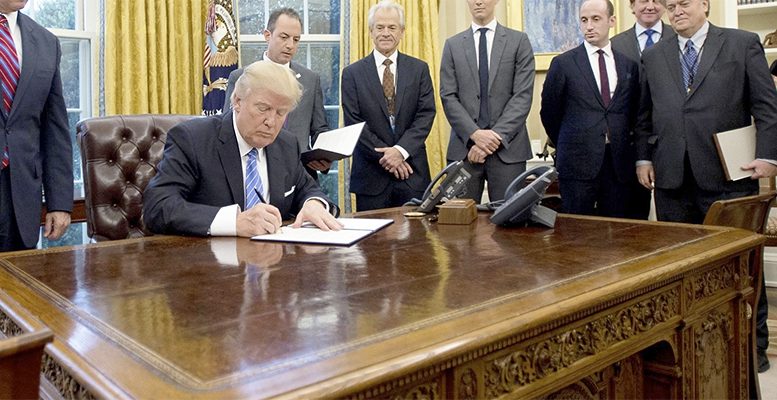 Late yesterday, Donald Trump outlined his plans for the overhaul of the US tax system in a speech in Indianapolis. The aim is to cut taxes by $1.5 trillion over 1o years.

To a large extent, the president reiterated his election promises: to streamline and simplify the income tax system by reducing the number of tax brackets; to lower the corporate tax rate, to provide an incentive for international firms to to repatriate earnings; to boost capital expenditure.

Citi says the tax reform blueprint is “largely in line with our expectations, though light on details.” They refer specifically to the issue of repatration of profits:

“Although not specifically clear, it appears as though this is being treated as a “deemed repatriation”, and is similar to the approach outlined in the tax reform blueprint published by the House Ways and Means Committee in June 2016). “

Julius Baer agrees Trump’s presentation was short on details, particularly on how the proposed tax cuts will be financed:

“He repeated the idea of closing some tax loopholes and ending the tax deductibility of debt service…ie that interest payment is no longer regarded as a cost factor but must be paid from after-tax income, just like dividends.”

The corporate sector has been preparing all year long for the ending of the deductibility of debt service, Julius Baer notes. The analysts explain:

“As it is widely expected that debt service on existing debt will be grandfathered from the change, US companies have been raising debt in a very aggressive manner. According to data collected by Moody’s, the amount of USD corporate debt issue is up 15% year-to-date from the same period last year.”

Citi also says it not at all clear how the tax reform will be paid for, and whether the plans will have a neutral impact on revenue:

Intermoney focuses on the fact that Trump’s promised fiscal stimuli have been on the cards now for some time and “still have to be definitively approved by the two US houses.”

“The fact is that the impact of this reform on confidence and, even, on investor outlook has been discounted for a good long while…and the real effect on the economy is far from being immediate.”

“So we shouldn’t overreact to this news on US tax reform, while the debate over the support from inflation for the Fed’s current strategy remains on the table.”