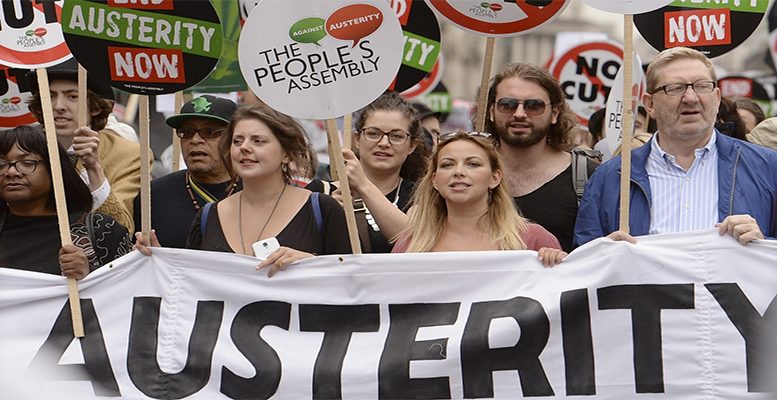 The theoretical reasons why supply might adjust to demand are not difficult to find. (They are often described by economists under the jargon word ‘hysteresis’.) Supply (in terms of output per capita) depends on labor force participation, the amount of productive capital in the economy, and finally technical progress, which is really just a catch all for how aggregate labor and capital combine to produce output. A long period of deficient demand can discourage workers. It can also hold back investment: a new project may be profitable but if there is no demand it will not get financed.

The point is that deficient demand was not due to “fiscal austerity”, but to “monetary austerity”.

Following the end of the 1990-91 recession, from 1992 to 2000, the ratio of government spending to GDP dropped by 5 percentage points. In the last stretch of that period, the government was even running surpluses!

Following the end of the 2007-09 recession, from 2010 to now, government spending has also dropped by 5 percentage points (starting from a much higher level).

In both instances, therefore, you can say that the recession was followed by “fiscal austerity”. However, while in the 1990s growth was robust throughout, it has been anemic since 2010.

The charts show that the main difference between the two periods can be found in the behavior of monetary policy as described by the growth in nominal spending, or NGDP, something closely controlled by the central bank.

Given the degree and persistence of “monetary austerity”, no wonder “hysteresis effects” have taken over.

We have given a monetary explanation for the weak recovery from the Great Recession. However, the Fed is oblivious to the damage it has caused by allowing “hysteresis effects” to take over. In a recent speech, Esther George of the Kansas Fed concludes with a thought that is consistent with many of her peers:

Removing accommodation in small doses, consistent with the pace of improvement in the economy’s fundamentals, should allow Fed policy to evolve from fueling an economic expansion to sustaining it.