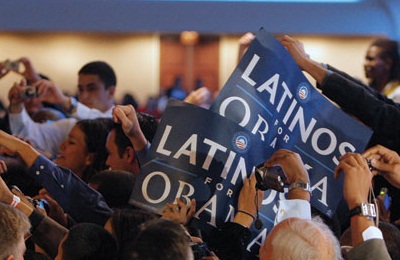 NEW YORK | Without Latinos the access to the White House in November is not guaranteed. They are 55 million Hispanic citizens in the U.S, according to the census, but they are more likely than other minorities to stay home on Election Day. Five months before the polls, both Republicans and Democrats are desperately struggling to seduce them. Despite the millions spent in TV and radio advertisement in Spanish, it won't be an easy task.

The economy remains the number one issue on the minds of all voters, no matter if they’re latino, gay or students. And Hispanics have been badly hit by the slow recovery, with a jobless rate above the national average.

“We want to listen to Barack Obama and Mitt Romney's plans, not only about inmigration,” Julian Teixeira, from the National Council of La Raza, the largest national Hispanic civil rights and advocacy organization in the United States, explains. “We'd like to know what they want to do to improve our economy, create jobs and access to education. And for that we need to vote. Out vote is our power. Many white Americans think that we're all illegal and 8 out of 10 Latinos in this

can you get back with your ex husband after divorce

country do have papers.“

Hispanics mostly voted democrat (67 percent) in 2008. Yet at this point many of them feel terribly disappointed by Obama's failure to deliver a comprehensive immigration reform. This month the President announced the so-called Referred Action, a bill that could start next August to stop deporting many young illegal immigrants brought to the United States as children who have not committed a crime in the U.S. and to grant them work permits. But the policy change does not include a path to citizenship.

“It is a good move, although insufficient and opportunist,” complains 25-year-old Mexican immigrant in New York Verónica Sevilla. “My hopes have completely disappeared with both candidates. If I could qualify for voting, I'd do it for Obama although he is quite mediocre. Voting republican is like getting into the water knowing positively that you are going to drown.”

Mitt Romney has lately softened his tone on immigration in order to narrow Obama's advantage, promising permanent residency to foreigners who gain advanced degrees at U.S. universities and preference to family reunion in handing out green cards. Notwithstanding many Hispanics don't forget that during the primaries Romney backed a high-tech fence project along the Mexican border to stop illegal newcomers.