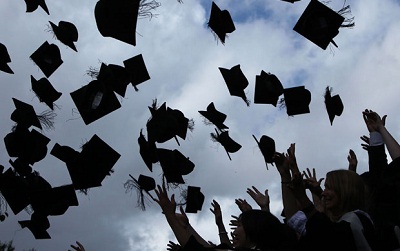 NEW YORK | At 27 years old, Andrew Legrand doesn’t own a house nor a luxurious car. And yet he has over $100,000 in student debt. He graduated from law school in Florida last June but he still hasn’t started to pay off his bills. As he explains to The Corner, he feels anxious that the clock is running.

“I didn’t have any debt prior to school. Now I owe $100k and even if I go bankrupcy I will not be able to get rid of that,” he says. “We were raised to go to college, get a job and pay for the loan, but that is not happening right now”.

Student loan debt has surpassed the $1 trillion mark in the United States. That’s more than the nation’s credit card debt.  It is the largest component of household debt other than mortgages. Unlike the majority of developed countries, in the U.S. education is not a basic right but an investment. Parents that can afford it open a savings account for their kid’s college as soon as they are born. People in their 40’s can still have a big burden from their college years.

“Student loan debt continues to grow even as consumers reduce mortgage debt and credit card balances,” Donghoon Lee, senior economist at the New York Fed, said in a statement. “It remains the only form of consumer debt to substantially increase since the peak of household debt in late 2008.”

The high unemployment rate has prompted more people to go back to school, which has increased loan demand. And the costs continue to soar. This adds to the frustration of those who haven’t found the job they were expecting.

“I’m not given the same amount that I paid,” complains Andrew Legrand, who has started his own small law firm in New Orleans. “If I could go back I would do another thing or go to a cheaper school. People should do a better estimation of the costs of the investment, we lack of personal finance education. We should find a balance of having a higher education but making it affordable.”

Others still see high education as an added value, a door to higher wages and a better lifestyle.

“I have a high debt of around $73,000 and I still think pursuing a college education is well worth it,” explains for The Corner Jacob Mack, who holds a B.S. in Psychology, has lab research experience and is currently enrolled in an online Master’s in IT Software Engineering.

The economic downturn and the unpopularity of tax increases have led some States to cut spending for higher education. But in the same time enrolling rate is growing and the cost of tuition and fees has continued to increase faster than the rate of inflation, faster even than medical spending. If this continues through 2016, the average cost of a public college will have more than doubled in just 15 years, according to the Department of Education.

Some economists are alerting of a bubble, comparing excessive student borrowing to risky mortgages (although most college students still manage to eventually pay back).

“If one is not thinking about where this is headed over the next two or three years, you are just completely missing the warning signs,” said Rajeev V. Date, deputy director of the Consumer Financial Protection Bureau.

Many children are not the perfect financial fit for a loan but colleges still go aggresively on marketing: their brochures don’t explain that half of all recent college grads can’t find full-time work, so it will be more difficult for them to repay their debt.

About 75% of American students borrow money to go to college, either from the government or private lenders, according to a Department of Education survey of 2007-8 graduates. Banks have no longer been involved in the federal loan program since July of 2010. The most popular federal loans are called Stafford, that last year financed about 7.4 million students. The money comes from the U.S. Department of Education or the taxpayers. Their price and their limits are not based in any individualized measure of risk, but politically determined by Congress.

That is why student loans have become a hot issue in the upcoming November election. Federal student loan interest rates are set to double July 1, unless Republicans and Democrats in Washington agree they’d like to extend the current 3.4% rates for another year. The big problem is however how to offset the $6 billion it would cost to do so.

Be the first to comment on "U.S. graduates: victims of the next bubble?"