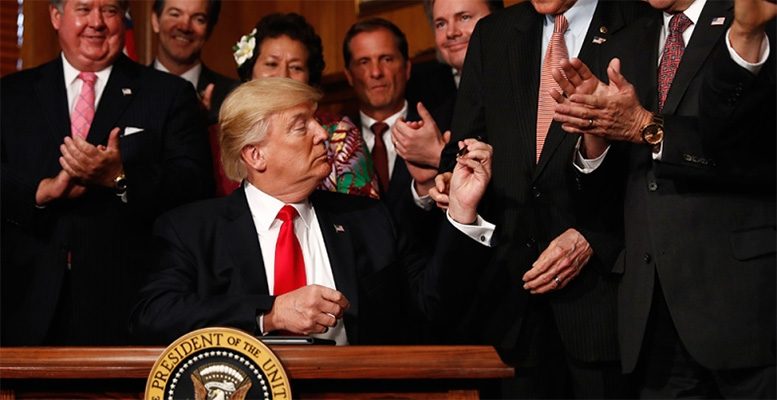 The one-page plan handed out by the White House in late April has few fresh details compared to what was promised by Trump during the campaign trail. But it is touted as the “biggest tax cut” for individuals since the Reagan administration and has drawn worldwide attention.

It is understandable that the Trump administration will push hard to have tax reforms passed after suffering a series of setbacks while attempting to repeal provisions of the health care bill brought by the Obama government. If they are implemented, the tax cuts are expected to attract more capital and talent to the U.S. while boosting exports. This can reshape international trade. As the largest trading partner of the U.S., China is closely watching how these changes to the tax code unfold and should brace itself for the impact.

Coincidently, shortly before the White House came out with its plans for dramatic tax cuts, China’s cabinet, the State Council, announced a slew of measures that are expected to reduce the tax burden on businesses by over 380 billion yuan ($55 billion) each year. It came hot on the heels of a decision earlier this year to trim nontax government charges, including business registration fees or quarantine of cross-border goods, by 200 billion yuan a year.

These measures will put China in a better position to tackle any fallout from America’s attempts to reform its tax code. It will also help China attract more investors and talent.

Due to differences in the tax systems and statistical methods, it is difficult to compare the actual tax burden on businesses operating in the two countries. But in China, the portion of the governments’ fiscal revenue coming from taxes is high compared with many other developing countries. The economic slowdown in recent years has hit most businesses, making the tax burden even harder to bear. In July 2016, the Communist Party’s all-powerful Politburo made tax reform a priority in the country’s economic agenda. But concrete measures implemented so far have fallen short of public expectations.

Tax cuts are a double-edged sword as they reduce government revenue and push up the budget deficit in the short term while reducing business costs. But in the long run, they will invigorate businesses, create more jobs and encourage consumption. Their success depends on how well the short-term losses are balanced by the long-term gains.

Reducing tax and nontax levies on businesses is also a key element of China’s ongoing supply-side reform. Efforts should be made to trim the overall tax percentage and reduce the number of tax brackets.

Cutting red tape is another vital step. Governments at different levels should either cut spending by streamlining institutions and reduce market intervention by government agencies, or be more tolerant of a fiscal deficit to create room for tax breaks.

Policymakers must also step up efforts to remove nontax levies on businesses. Currently, about half of China’s macro tax burden comes from nontax charges, including administrative fees and levies imposed by local governments to build infrastructure or schools. There is a need for strict oversight on these so-called “special funds” fed by these local levies. But groups with vested interests in different departments have impeded efforts to regulate nontax charges and abolish excessive fees. Moving forward, some of the charges must be integrated into a tax levy to better regulate the essential ones while eliminating the others.

Cutting taxes and additional charges is challenging because growth in fiscal revenue is not enough to cover the ballooning cost of social welfare. Therefore, it is vital to establish a proper system to share tax revenue between the central and local governments so that grassroots authorities have sufficient income despite tax cuts.

The reform blueprint set at the third plenum of the Communist Party’s 18th National Congress in late 2013 vowed to help local governments set up regional tax systems to strengthen local coffers as the country shifts from a system that relies on business taxes to value-added taxes. Some local governments have seen tax revenue decline during the process. New levies such as property ownership taxes should be introduced to help reduce this shortfall as soon as possible.

More importantly, China should carry out the reform proposal to inject some assets from state-owned enterprises into a national social security system to reduce the burdens on private companies. In recent years, the central government has reduced the percentage contributed by employers in some regions to the welfare system, but it’s had a limited impact on businesses.

Reducing the mandatory welfare contribution threshold for companies will help ease cash flow pressures. Using state assets to cover any shortfall in the social security system will allow it to better protect the poor and unemployed. Altogether, these efforts will help improve business efficiency and support reforms to trim overcapacity among state-owned giants.

The effectiveness of a country’s tax system is measured by its productivity. It’s also a reflection of the health of the country’s institutions. While analysts expect the Trump administration’s tax overhaul to revitalize U.S. businesses, China, as the world’s second-largest economy, should also grab this opportunity for domestic tax reform that will underpin its shift to a sustainable growth model and allow it to retain its competitive edge.