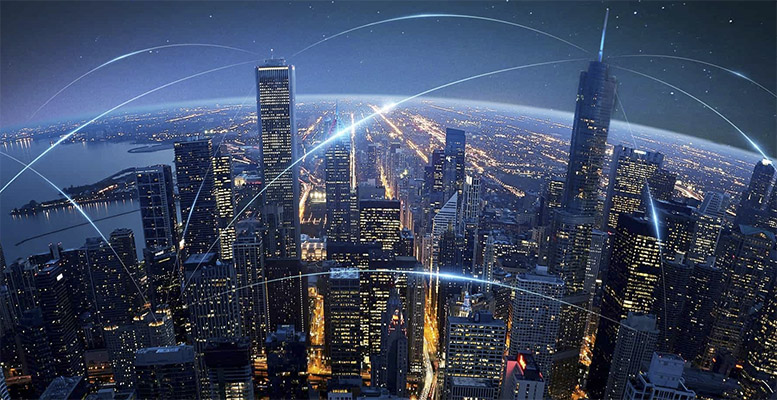 The most successful company strategies over the last few years all have one thing in common – a data-driven operating platform. Companies such as Facebook, Amazon, Netflix and Google (the so-called FANG stocks) are able to create a significant informational advantage when they use data collected from their platforms. The quantity and quality of this information allows them to better understand the shopping habits of their customers like never before.

Crucially, the more data they collect the better their insights. For instance, Amazon is in a position whereby it knows what we want to buy before we do. For the FANGs, more data means more value.

A global city that constantly evolves, grows and innovates could be an even more valuable platform than those owned by the FANGs.

Similar to tech companies, cities become more efficient as they become bigger. For most things, including organisations, the larger they become, the less efficient they become.

Since the earliest days of the industrial revolution people have been moving to cities to seek employment and this process is accelerating as technological innovation creates new opportunities, which attracts more people and further investment into a city.

Like tech stocks, only a select group of global cities will succeed

As any early investor in tech stocks will tell you, for every successful Google and Facebook there are a huge number of other start-ups that fail. The same is true with cities and many cities will cease to have relevance on a national, regional or global basis.

The challenge for investors is identifying which cities will succeed and dominate their respective fields, in the same way that companies such as Amazon and Facebook have come to dominate theirs.

For instance, it is widely acknowledged that both London and New York are world leading financial centres. The financial talent pool and fintech ‘operating platform’ that both cities possess is almost impossible to replicate elsewhere.

Similarly, Shenzhen is not only Asia’s leading city for technology expertise but it is fast rivalling Silicon Valley. Talent and business are being attracted to the city, leading to more and more innovation and expertise.

Global cities, like FANGs, are growing platforms that become more valuable with scale

Boston is a good example of a city that is succeeding. It is the leading “platform” for medical research; this results in other types of business being attracted to the city, such as venture capital which will try to monetise the (medical) ideas. The city is a classic example of industries “clustering” together. This is an essential component of a city’s success as it boosts efficiency and allows companies to share ideas.

In Boston’s case it is the presence of two of the world’s best universities, Harvard and Massachusetts Institute of Technology (MIT), which draws in other businesses to cluster near to these innovation hubs. For instance, all the major pharmaceutical companies need to be close to sector-leading drug research and creation. Similarly, venture capital funds need to be located close to this point of innovation, so that they can monetise the ideas.

Innovation is driving the success of global cities

Economies today are being driven by innovation rather than manufacturing and it is cities that are able to monetise this change that are succeeding. In the past, cities such as Detroit were successful because of their strong manufacturing base, but have since declined as they have failed to adapt.

The number of patents filed by cities acts as an effective barometer, with successful cities (such as Boston, San Francisco and San Jose) filing significantly higher amounts than failing cities (such as Detroit).

Value of assets in successful global cities are currently under-priced

Cities are the epicentre of data points, with millions of people in one location, consuming and innovating. As the leading global cities grow they draw in more expertise which in turn leads to more consumption. Crucially, the efficiencies increase with size.

It is almost impossible to replicate any of the FANG’s operating platforms and we believe the same applies to the leading global cities. Which city will ever replace Boston’s medical expertise or Shenzhen’s technological prowess?

The leading global cities are unique operating platforms, growing in expertise and efficiency each year. As these locations become more important, so will the assets that are located within them.

The key question for investors is, which operating platform are you invested in?