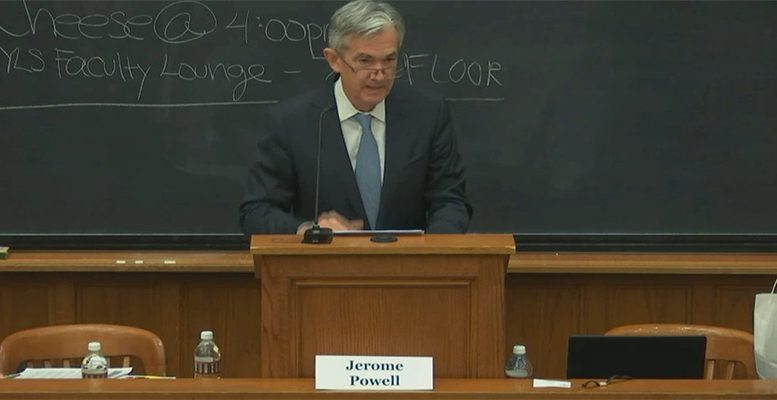 A new Fed Chair is always required to show his anti-inflation credentials: Booming Labor Market Could Pose Challenge for Powell and the Fed – Janet Yellen’s prospective successor may find himself needing to restrain an economy that is too vibrant:

The hardest job in central banking is to take the punch bowl away from the party just when people are starting to have fun. Jerome Powell, the Federal Reserve’s prospective chairman, could soon have to assume the role of sober killjoy as he is confronted with an economy and markets that are heating up.

That could put Mr. Powell in a tricky position. On one hand, an economy at risk of overheating should prompt the Fed to steadily raise interest rates to cool it down.

… some Fed officials worry that such a strong labor market could cause inflation to rise too rapidly as pent-up pressure releases, forcing the Fed to raise rates more than planned.

In a June speech, Mr. Powell said the continued strength of the labor market “might warrant a faster pace of tightening.”

For now, weak inflation has been holding the Fed back, he said. But he added that “there are good reasons to expect that inflation will resume its gradual rise” in an environment of tighter labor markets and increased consumer spending.

In the panel below, the vertical bars mark the moment each of the last five Fed Chair took power and what happened to the FF rate, inflation and unemployment in the follow-up.

The only one that decreased rates immediately after taking power was Arthur Burns. The others raised rates while Yellen´s first rate hike took place 22 months after starting on the job.

To better gauge how the different Chairs performed relative to their dual mandate of “maximum employment” and “low/stable inflation” (which since January 2012 means 2%), it is more useful to observe the behavior of aggregate nominal spending (NGDP) growth, over which the Fed has close control.

Falling and then stable inflation during Greenspan´s command is reflected in the relatively stable spending growth.

Bernanke´s “spending plunge” illustrates the biggest monetary policy mistake since the 1930s. There was no inflation worries (apart from the oil shock of 2007-08, which according to his own writings the Fed should ignore, but did not). Yellen just kept the economy on the same “depressed road”. The lower but stable spending growth was sufficient to keep inflation “too low” (because under 2%) and unemployment falling.

The pick-up of spending in the aftermath is timid and insufficient to generate anything that could be called “recovery”.

The two charts below illustrate what I call the DWL cycle, for Deepest recession, Weakest recovery and (shortly) Longest expansion.

In the second chart you note that for the first few quarters into the recession, the economy´s performance was “better” than average, despite the tumble in house prices and the financial crisis. However, while in many other occasions the economy had started to recover, in this cycle it plunged deeper. That was the outcome of the massive monetary (Aggregate Demand) shock generated by the Bernanke Fed.

The present and clear danger is that if Powell is “sold” on the idea that he has to restrain an economy that is “too vibrant”, the outcome will be “disaster”.