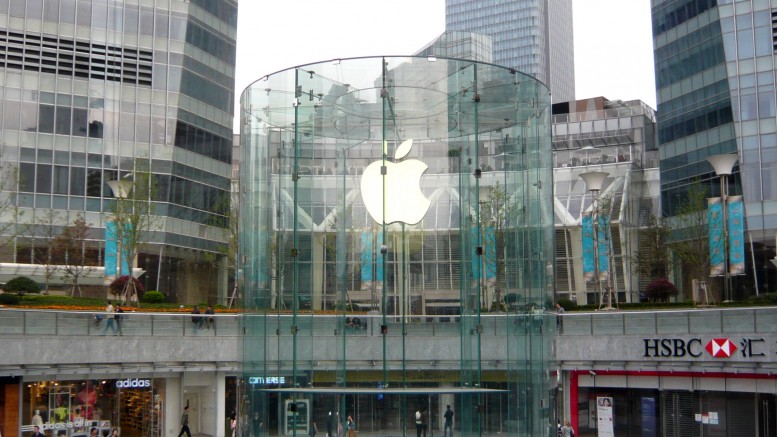 Han Wei  via Caixin | Apple Inc. is shifting gears and promoting new apps and services to rev up growth in China amid a slump in sales for its expensive devices as local brands nibble at its market share.

For many Chinese consumers, owning an Apple device was synonymous with being wealthy and fashionable, and in recent years many lined up overnight to grab new models as soon as they were released. This voracious appetite for Apple products made the Greater China region, including Hong Kong and Taiwan, the second largest market for the tech company, after North America. Over 27 percent of its revenue in the last quarter of 2015 came from China, company data showed.

But this dizzying growth ride has hit a bump on the road as local firms catch up. Domestic competitors, with lower-priced models offering comparable features, are eating into Apple’s market share. The share of iPhone’s in the country’s mobile handset market declined to less than 13 percent in the first quarter of 2016 from 16 percent in the same period in 2015, Data from U.S.-based market analysis institute International Data Corporation showed. Meanwhile, local brands like Huawei, Oppo and Vivo made steady gains. Huawei’s share went up from 11 percent to 16 percent in the first quarter of 2016, while the figures for Oppo and Vivo, two low-end smartphones, more than doubled.

Apple’s revenue in the country has also slumped. Earnings from the Chinese market tumbled 26 percent to US$ 12.49 billion in the second quarter for 2016 fiscal year, from December 27 to March 26, compared to a 71 percent growth in the same period in 2015, the company’s latest financial report showed. Falling sales in China was blamed for more than half the decline in Apple’s global revenue in March, when the tech giant experienced its first quarterly drop in 13 years.

The company is shifting its focus to tap into new areas of growth like online payment, apps and services, said Apple’s CEO Tim Cook during his visit to Beijing on March 16. Cook also announced plans to invest US$ 1 billion in Chinese ride-hailing service Didi Chuxing, as part of this plan to steer away from relying on devise sales for growth.

Sales of its flagship product, the iPhone, declined 18 percent year-on-year for the first time worldwide, Apple said in March. This was partly fueled by the slump in China.

“Apple’s hold of the Chinese market is shrinking, in term of the number of units delivered to retailers, or shipments, and market share,” said Liu.

Between January and March, iPhone sales in China totaled 11.5 million units, 2 million less than the first quarter in 2015, data from CCID showed.

Apple’s investors have notices its slipping sales. Over the past year, the company’s share price dropped by almost a third, evaporating US$ 200 billion in market value. On May 16, U.S. hedge fund Tiger Global Management, a major investor in technology stocks, said it has cut its stake in Apple by 46.6 percent.

Local telecom operators have lost their love for the iPhone and this has accelerated the slump in sales for Apple’s expensive devices. Network operators relied on the premium smartphone to attract users in big cities to sign up for third-generation wireless services. But operators now prefer cheaper devices as they move to smaller cities and rural areas, where expensive gadgets are beyond the reach of many, said an employee in the marketing team at a telecom company.

Domestic brands like Huawei are now at advantage because they offer features comparable to that of the iPhone at a lower price. In recent years, “the iPhone was irreplaceable in the high-end market. Users would turn to other operators if we didn’t have one on offer” said an employee of China Mobile, the country’s largest wireless operator. “But now, the Apple device is no longer the exclusive choice,” said the source, adding users were more willing to try other brands.

The latest iPhone 5 and 6 models have failed to turn the tide of users opting for cheaper handsets, experts said. One source at a telecom company’s provincial branch said iPhone sales at his branch in 2015 fell by more than one-fifths, as local rivals take a bite off Apple’s share.

Apple is rolling out new stores and aggressively expanding its sales network to push its products directly to customers. Cook said the number of Apple stores in the country will increase to 40 by the end of 2016 from about 24 in late 2015. The company opened five new outlets in cities including Guangzhou, Xiamen and Qingdao in January.

Apple has also inked partnerships with mobile phone dealers such as Shenzhen Aishidi with a strong presence in smaller cities, a source close to Aishidi said.

One phone dealer said Apple still has great potential in second- and third-tier cities if it rolls out cheaper versions of its products. But Liu said the company has so far made no attempts to tap into the lower-end of the smartphone market afraid that it may dilute its brand image.

Instead, Apple is turning to apps and services to shore up its bottom-line. In the two weeks that ended January 3, users worldwide spent US$ 1.1 billion on software and services, with single-day sales hitting US$ 144 million on January 1.

The China market ranks third in terms of app sales, company vice president Phil Schiller told Caixin during his January visit to Beijing. About 270,000 apps on different App Stores are developed in China, and generated more than US$ 2.5 billion in revenue in 2015.

In addition to app sales, Apple also profited from music and video downloads in iTunes, its iCloud storage service and mobile payments made using Apple Pay. In the second quarter of 2016, revenue from app sales and services almost doubled to US$ 6 billion, from US$ 3.17 billion in the same period in 2012.

“Emerging markets are not only growing but have also created different business models, such as the online-to-offline service business in China,” said Bryan Ma, vice president of IDC’s Asia-Pacific division. “I think one reason that Apple invested in Didi is to gain some firsthand insights on how the country’s large e-commerce sector worked.”

Apple is gingerly navigating its way in the country riddled with policy minefields to promote its services. From April, Chinese users have been unable to access Apple’s digital book repository, iBooks Store, and iTunes Movies launched in September. The New York Times cited unidentified sources who said the country’s media watchdog, the State Administration of Press, Publication, Radio, Film and Television, had told Apple to shut down these services. The company has not issued a statement clarifying the reason for shutting these services down in China.

According to Mou Li, general manager of Markor Furnishing’s retail department, the new app allows client’s to design their own furniture and place orders via iPhones or iPads.

By the end of 2015, Mobile First has developed more than 100 apps for global clients in retail, insurance, finance, telecom and aviation.

“As competitors are catching up, Apple needs to change its strategies to attract users and find new revenue sources by improving its iOS platform and services,” said Lu Junkuan, chief telecom industry analyst at U.S.-based research firm Gartner. “But in the long run, the company must seek new markets and customers. Expanding in to smaller cities and trying to entice corporate clients in China are steps in the right direction.”