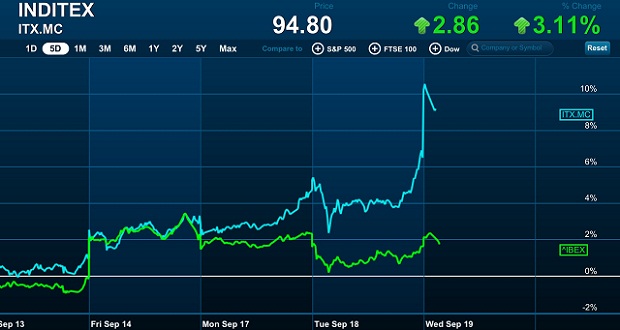 The Spanish Group reported Wednesday that its net profit has increased by 32%, totalling €944 million. Market expectations were about €905 million. At the end of the first half of this year, from the 1st of February to the 31st of July, Inditex had net sales of €7.2 billion, 17 % more than the same period from last year. Like-for-like sales have increased by 7%.

“The Group continues to see opportunities for global growth in all the geographical areas where it carries out its commercial activity,” the company said in a press release.

Among the openings that took place during this semester, there was the launching of Zara’s new store image at the Fifth Avenue in New York, which has afterwards been introduced in other cities; Stradivarius launching in Mexico, spreading its presence to 50 markets and Zara Home’s entry in Colombia and Brazil.

But Inditex hasn’t forgotten about its domestic market. CEO, Mr Pablo Isla mentioned at the General Meeting of Shareholders “the substantial investing effort made in infrastructures in Spain, on which the global expansion for the eight commercial concepts is based. This effort maximises value in terms of human talent and technology, and promotes growth together with more than 5,500 Spanish suppliers.”

Investment in Spain has been realised through three principal projects, the corporation noted: the extension of Inditex’s headquarters in Arteixo, increasing in 70,000 square metres Zara and Zara Home’s commercial premises, the building of Massimo Dutti’s new logistics centre in Tordera, introducing state-of-the-art innovations and, finally, the acquisition of 300,000 square metre in Guadalajara aimed at hosting a new international logistics centre.

The plan will amount altogether to €450 million in Spain and an estimated direct job creation of 1,400 new positions.

“Through this investment projects, more than 200,000 square metres will be added to the commercial and logistics surface aimed at supporting international growth from Spain,” the release explained.

Additionally, the Group has created 9,267 new more jobs in comparison to the same period from last year, ending 2012 first half with 112,468 employees.

Zara Home and Massimo Dutti will start their online sales in the United States in October.

Be the first to comment on "Inditex strikes again: 32pc net profit growth"