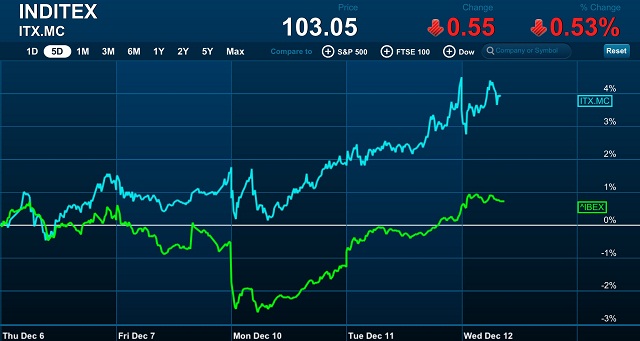 Inditex added 360 new stores in 54 different markets in the first nine months. Those launches brought the Group’s total number of stores worldwide to 5,887 in 86 markets, following the openings of the company’s first stores in Armenia and the former Yugoslav Republic of Macedonia.

Subsequent to the end of the first nine months, Inditex reached the 6,000-store mark on 5 December when it inaugurated an eco-efficient Zara at 460-490 Oxford Street in London.

Another 2012 milestone was Massimo Dutti’s arrival in the North American market, with the openings of the concept’s first stores in both the United States (New York City in October and Washington D.C. on 4 December) and Canada (Toronto in September). Massimo Dutti unveiled its new store concept at one of the most upscale locations on New York City’s Fifth Avenue, welcoming shoppers to the world’s largest Massimo Dutti establishment, with 1,270 square metres of sales space.

The launch followed the arrival of Massimo Dutti’s first store in Toronto, which heralded its Canadian debut.

“Another example of the company’s multi-format global growth strategy was the opening of a Zara store showcasing the concept’s revamped store image on Munich’s Neuhauserstraße, the city’s most appealing shopping destination. In addition, Zara inaugurated a store in South Africa’s Cape Town and revamped existing stores to show off its updated brand image in Tokyo’s Ginza district and on Moscow’s Tverskaya Street,” the group added.

As for other Inditex concepts, highlights included Bershka’s arrival in Frankfurt (Germany) and Uterqüe’s first foray into China with two stores–one in Hong Kong and another in Beijing–along with a new Uterqüe location in Mexico.

Stradivarius opened its first Mexican establishment during the period, while Pull and Bear revealed an updated store concept in Vienna. Oysho debuted its first store in Macau, while Zara Home began operating in Brazil.

After the launch of the Zara online sales in China in September, the brand plans to open its online store in Canada during the 2013 spring/summer season. Store sales in constant currency terms rose by 15% between 1 August and 9 December.