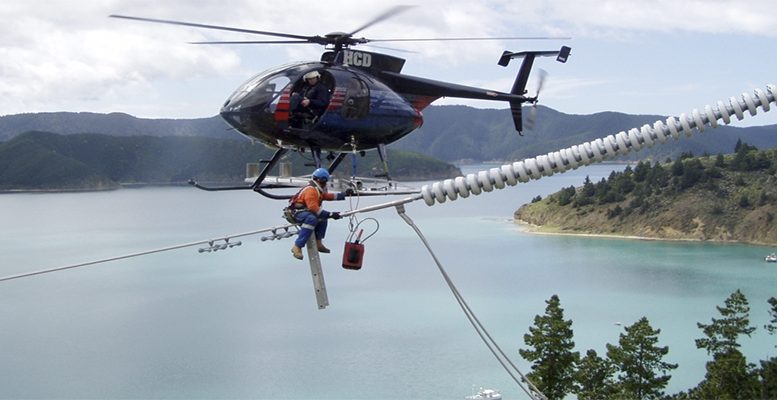 Australian firm Broadspectrum during the maintenance of cables over an idyllic backdrop.

Ferrovial has succeeded breaking into the US market with its services division as well, thanks to the business Broadspectrum has brought it in that country. It bought Broadspectrum two years ago in Australia.

The Spanish company headed up by Rafael Pino merged the business which the Australian firm has in the US with the international branch of Ferrovial Servicios, with headquarters in Texas.

So Ferrovial has now met its strategic objective of operating in the US market with its services business as well. It already has a significant position in the construction and concessions business there.

Using this “platform” Ferrovial expects to continue to grow its services business in the US organically, according to the CEO of Ferrovial Servicios, Santiago Olivares, in a presentation on Broadspectrum to analysts.

The Australian firm has also allowed Ferrovial to double the presence it had in Chile, with the contribution of services to mining companies, generating revenues of some 64 million euros a year.

During the presentation, Ferrovial’s management flagged that the integration of Broadspectrum was now complete. The acquisition was closed in June 2016.

It has also carried out a restructuring, implemented an efficiency plan and has given up the contracts for managing centres for immigrants, “in coordination with the Australian Government” as the contract which was in force ended in October last year.

In this new phase, Ferrovial’s Australian services division is focusing on growing its core businesses, services for public administrations, infrastructure and transport and industrials.

On the hunt for contracts worth 31 billion Australian dollars

Broadspectrum has its eye on contracts to compete for in all these sectors in Australia and New Zealand for a total of 31 billion Australian dollars (25.2 billion euros).

The company is counting on collaborating with Ferrovial Services to strengthen its options in terms of obtaining these contracts. And it is confident it will raise its revenues by 11% to 3 billion Australian dollars this year (1.91 billion euros).

For the next five years (2018-2022), Broadspectrum expects average annual accumulated growth of between 4% and 6%. So the Ferrovial group expects this subsidiary to generate revenues of almost 4 billion Australian dollars (some 2.45 billion euros) at the end of the period.

Ferrovial considers that the “fundamentals” which led it to buy Broadspectrum have been confirmed two years on. Its services division was focused beforehand on Spain and the UK, but the Australian firm has given it significant capacity for geographical and business diversification. Australia is currently this division’s second market.