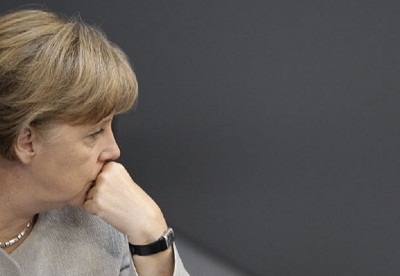 By Pablo M. Simón and Inés Abril, in Madrid | Panic is gathering momentum, and money is flying away from Spain into other countries of the euro zone.

The latest data from the national balance of payments show the fastest flight of capital so far, even higher than that after the collapse of Lehman Brothers.

The bad new is that the spiral of fear that affects investors is causing uncontrolled reactions: now there are several analysts that are pointing the finger at the German debt; the adored Bund of the only country that is taking advantage of the delicate situation within the debt markets.

The status of Angela Merkel’s country, which still maintains without problems its triple A in all the rating agencies, is so privileged that it has been able to get funding at negative rates in short-term bills. Meanwhile, the yield of its 10-year bonds fell below 1.2% in June 1. Indeed, investors prefer to stay away from the peripheral countries, and only central banks are present when there is a public auction. Germany, however, has become a powerful magnet. But this is risky: debt yield moves in the opposite direction of that of the prices. This means that the lesser is the interest, the higher will be the price.

Over the last two years, investors have sought refuge in the German Bund, and the prices have soared. But, is this sustainable? If the asset is overvalued, any change in the tendency could make it burst. Analysts in Madrid show similar opinions regarding the excessive price of the German Bund. According to Migu

How to win your girlfriend back

“it seems clear the existence of a bubble in the German Bund. Although, as with other bubbles, nobody admits it until it has burst.”

The thing is that the yield of the 10-year German bond has dropped by more than 200 basis points in just one year: last spring it was paid at around 3.5%. The German bond took advantage of the collapse of Lehman Brother (the yield fell from 4.7% to 2.75% in just some weeks), but also of the suffering of Greek, Irish, Italian, Portuguese and Spanish debts.

But the situation can reach an unsustainable point –if it hasn’t been reached already. Pimco, the largest fixed income manager in the world, has begun to warn about the risk of a bubble in the German debt. Not only that, but it has started to sell in order to reduce its exposure.

Now it is necessary to figure out how to escape from the impasse. As Miguel Paz says,

“Germany will have to make estimates, and it will have to work out if it is cheaper to keep on building the euro zone, or if it’s better to destroy it. The latter possibility is not likely, so the most logical choice is to accept the Eurobonds. This decision would have an instant effect on the debt of the peripheral countries, but also on Germany's. The debt would relax for the peripheral countries, whereas the German debt would go back to more rational levels, around the 2.5%.”

This scenario would imply losses for the investors, even if the bursting of the bubble weren’t that brutal. If the yield went up from the current 1.5% to 2.5%, for example, the unrealised loss would reach 6%. If it went back to the 4.5% previous Lehman, the fall in the price would brush 16%.