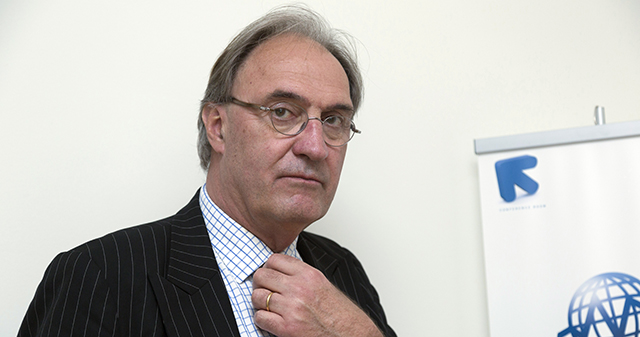 AF: Europeans have accumulated huge savings although we lack of big investment institutions and important markets. What do you think of Brussels Capital Markets Union project?

DW: I worked in Brussels for 34 years and most of my work there was really building capital markets in Europe. Financing small companies has always been a problem in Europe. And because Europe is bank-centric, the capital market side has not been able to substitute the decline in credit from the banking system. That is why you need capital markets to function better. Venture capital has never worked well here, partly for cultural reasons, attitudes to risk taking are different than in the United States. And if you fail you are on a black list and you’ll never get any more  credit for the rest of your life. I think this project is really urgent and I don’t get any sense of real urgency.

DW: We are already seeing a dangerous rise of political extremism in Europe. That is a recipe for fragmentation to the euro, the eurozone and the EU as a whole. I think this project is really urgent because it could strongly boost the economic potential of Europe. But I don’t think it fully takes into account technology. In many emerging countries the banking system is a telephone.

AF: Brussels wants the capital markets union ready by 2019. Isn’t that too late?

DW: Europe always works best with deadlines. 2019 is a long term deadline, and maybe that is realistic, but consideration should be given to try and use the fast track procedures of the treaties.

AF: IOSCO brings together the world’s securities regulators. Many think the securities markets have been the only ones working well during this crisis…

DW: There were stock exchanges that didn’t always function, and pressures on short selling at a certain time, particularly at banks’ stocks but I think overall you certainly didn’t see the systemic damage caused through the banking system. Let’s be honest as well: securities regulators did not fully understand the dangers of securitization. Actually we worry about the functioning of some of the corporate bond markets. Sovereign markets tend to be more liquid but a lot of corporate bonds are not liquid at all. There are very few corporate bonds that are traded ten times the institutional size every day.

AF: At the beginning of the economic crisis, the G20 insisted on tougher regulation of over-the-counter derivatives. Right now the European Union and U.S. negotiators are struggling to agree over rules for derivatives’ clearing houses. How is that going and what is the IOSCO doing?

DW: The problem all along between the EU and the US on derivatives is that there was no symmetry, they didn’t act at the same time: you had one set of rules drawn up at the US and slightly later another set of rules at the EU, and they didn’t match. And ever since, then it’s like Mecano for children: you are trying to bolt two legal systems together. There is a lot of work going on at the FSB and at IOSCO trying to solve this. And it’s not finished. There is only one way to logically regulate global markets and that is to have global principles agreed and then the major jurisdictions apply those laws domestically at the same time.

Plus, the share of EU-US markets is going down. Look at the growth in India, African countries. You are going to have a plurilateral world and a big matrix of countries and different approaches. Try to sort that out on a bilateral level, you’ll never do that.

AF: Then you are basically working with the wrong parameters now…

DW: Well, I don’t think there is enough thinking about the new world. I don’t think people are fully understanding the structural changes going on in the global economy. India could well have a faster economic growth rate than China very soon. This means a huge capital market has to develop behind that. It already is big, it will be bigger. Unless we coordinate and upstream in the global framework that I’m talking about, the real danger is that you actually get more fragmentation, not less. So you’re right, the framework has to change.

AF: And who is responsible for changing that?

DW: It’s the G20. First the political sign has to come from the G20, then the FASB and standard setters such as IOSCO have to carry it out. We could do it on our own, but it would be much more difficult. But that requires everybody to agree and not everybody agrees that this is what you need. The US would certainly not agree on that type of model. The history of the US is a history of independence. One has to understand the culture of the US and its approach to international relations. But actually the sort of model I am talking about in the future is enormously beneficial to the United States because the more convergent you have global rules the better it is for the best firms in the world, and those tend to be the US firms, in finance.

AF: How can we trust the supervision of markets, their assessment, made by rating agencies that have systematically failed in their predictions? Are we in their hands for good?

DW: In general what we have is quite a sort of oligopolies: credit agencies, auditors… Competition is a good thing and the more we can encourage it, the better. Now if you take the credit rating agencies, for sure their performance on rating securitized products were disgraced, and they know that. And measures have been put in place, both by legislators and the firms themselves to avoid these sort of things happening again. I am not sure I would argue that their performance in terms of rating sovereigns was so bad. A rating is an opinion on default, there is nothing binding about it. But ratings are embedded in the financial system, in the Basel framework, in many mandates for asset management, and you have to deal with that. If you are a big firm of course you do your due diligence. But what if you are a small firm? You have to rely on somebody. It’s a complex jigsaw, but there has been important progress: ESMA in Paris inspects credit rating agencies, and can fine them if they don’t comply with the law. What is quite striking is that the same sort of more intense oversight of discipline has not been paralleled in the world of auditing.

AF: One of IOSCO’s Policy committees is working on corporate governance. What do you think of Spain’s last Good Governance Code?

DW: I haven’t looked at in great detail but I think there are a lot of very sensible ideas. Codes of conduct can work when all the incentives are lined up. Let me give you an example. IOSCO has a remarkable instrument called the multilateral memorandum of understanding. We have 105 securities market regulators signed up- all the big one- exchanging information on insider trading, market abuse, giving each other information on bank records, telephone records, transaction records. It works because I may need your help one day and you need my help now. It’s a mutually reinforcing system which works. But when it comes to corporate governance codes, can we put our hand on our heart and say ´These codes have fundamentally changed´: 1. Practise 2. Does it mean in general-and I’m not talking about the Spanish code- that if you sign up to a particular code, does it result in better economic performance in the sense of better returns of investors and shareholders? I’m not sure. I wish it did, but if that is not the case, I think you have to think about law for certain aspects of this. For example, in the financial area, I think that the banking regulators or securites regulators should absolutely know and have a vetting power over who sits on these boards. Why? Because if those boards fail, Spanish society will pay a price.

Be the first to comment on "Markets supervisor: With its capital markets union Brussels is behind the curve"