The US stock market represents 54% of the MSCI world markets’ index and 60% of the MSCI for developed countries, according to The Economist. Before the Japanese market’s bubble burst, in the 1980s, it reached 44%. The 54% is much higher than US GDP/Global GDP, as can be seen below.

We can also see how the Japanese stock market, coincidentally or not, has returned to a level similar to that of Japan GDP/Global GDP. 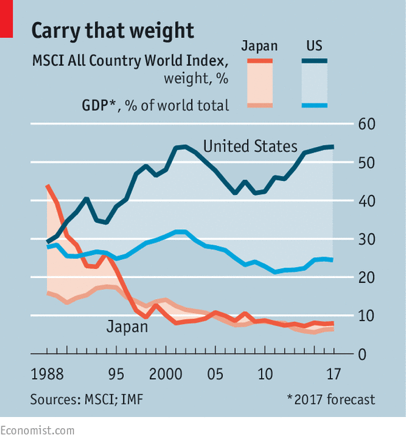 So does this mean we are facing a huge crack in the US stock market? No, it’s not a definitive indicator, but it’s another one to add to those we have mentioned before which point to the US market being overvalued. Overvalued with a) a PER at record levels, b) the second highest Shiller indicator on record, and c)a GDP capitalisation of 167%, higher than the 146% at the time of the Dot.com bubble in 2000.

So yes, there is no doubt that the US equity market is overalued, although that doesn’t mean it won’t continue to rise. For how much longer? And what is even more important, can we hope prices will adjust to their fundamental value without any trauma or systemic risk, without affecting other markets? The truth is we don’t know. This depends on many unknown factors, like the level of debt in relation to stock market investment, or where the Fed’s interest rates or bond rates will go? According to some theories, there are no bubbles. The markets are efficient. According to others, what there is are bad monetary policies. If there were no debts there would be no problems, but there are. Like always.

It’s a mystery. All we know is that, on the one hand, global debt has also grown to record levels, and that a certain level of stock market decline would definitely have a contagion effect on the rest of the world and would upset the global debt-investment balance. Investors don’t take these things into account for one simple reason. Because they hope to unwind their positions in time. But I don’t know if they take on board the fact that when everyone tries to do the same at once, liquidity disappears. And without realising it, you have lost half your assets. It may even be good news for some that the value/MSCI has risen to record levels…