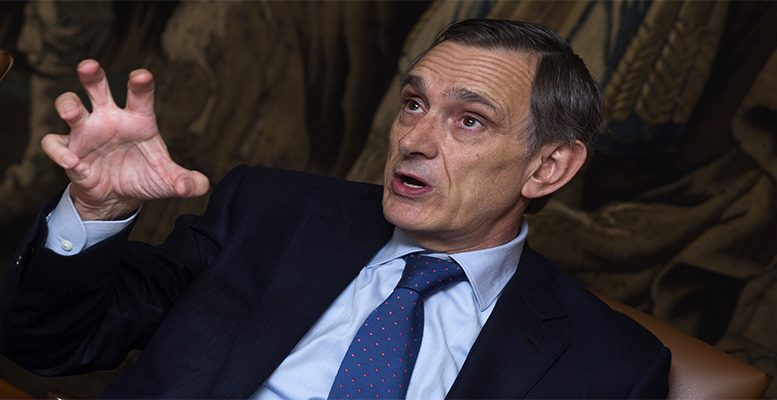 Alejandro Legarda Zaragüeta is very familiar with the ins and outs of Spanish industry. He was managing director of Construcciones y Auxiliar de Ferrocarriles (CAF) until 2013, but is currently on the board and is a member of the Audit Committee. He is also on the board of Viscofan and Pescanova.

Q: The exception to the ‘extra industrial’ thinking in Spain is the Basque Country, which proportionately has almost as much industry as Germany. Why have we not imitated it?

A: That’s true. It’s a region with a long, very important industrial tradition. It also has a political class which, even in times of serious conflict, has shared the objective of boosting their industry, irrespective of the party they support. At the moment, one of the proposals from the party in government is to achieve the goal of industry representing 25% of GDP in the Basque Country. It’s the German model, where the idea that services could continually substitute industry never caught on.

Q: Some Spanish governments have announced their interest in industry. Have they actually done anything to promote it?

A: They have done a few things, but not enough. The reality is that I have never seen them present any coherent programme and set out a real plan. And this is not just the Industry ministry, but the government as a whole, because this is a question which crosses over various ministries. We don’t even have an Industry ministry at present. There is an Energy ministry, but Industry has been reduced to a department within the Economy ministry.

Q: Spain has increased its industrial exports. How do you explain that? Is just because labour costs are lower?

A. Well, it’s true that Spanish exports have grown, but if you look at the numbers you find something interesting: that imports have stagnated, which is due to the decline in consumption in Spain as a consequence of the crisis. What am I saying? That if a real economic recovery happens in Spain, the most likely thing is that imports will start rising again and the trade deficit as well.

Q: I imagine that industry will have improved the quality of its products

A: Of course it has, but I am going to give you one figure: in the last 15 years, the technological content of Spanish exports has declined (although not by much), when it was expected that it would increase. So where have we really grown? In primary sector exports: food, drink and tobacco.

A: Spain’s agro-industry is shooting ahead

That’s all very good, but look, Spain only has a trade surplus in three sectors: agro-industry, the non-chemical semi-manufacturing (metals, paper, ceramics) and the automotive. And we should qualify this by saying that Spain’s automotive industry is in the hands of foreign multinationals, which means we are in a situation of dependence. We have to fight to keep them manufacturing here and there is always the risk that they could stop at any time. If they do continue here it’s partly due to Spain’s labour flexibility, as well as the fact that other locations where they could produce are more risky from a political point of view.

Q: And then there are labour costs, lower in Spain, almost half those in Germany.

A: That could be seen as an advantage, but at times it gives the sensation that our governments want to implement an economic model from the 1960s in Spain, one which implies low salaries. So what have we been doing for the last 50 years? In Europe this doesn’t make sense. Germany can pay those salaries because it offers technology and quality. This is the only way forward to be able to pay decent salaries. What we are doing, if we don’t remedy it, will mean that our children will be worse off than we are.

Q: They don’t seem very worried in Europe about industry. They seem more obsessed with the environment.

A: That’s true. With their liberal criteria, they thought it was an issue that the market should resolve. When the words industrial policy emerged, they said that this was an interventionist policy which should be avoided. But it has to be said that this is starting to change. When Antonio Tajani was deputy president of the EC, he published a paper where he proposed that it was now time to begin to think again about industry and that measures should be implemented to promote it.

Q: What do you think about the wages devaluation which has happened in Spain? Do you think they need to rise?

A: Of course. The situation with low salaries over the last few years is so critical…When you bet on low salaries it’s an endless process. And there is no logic to this. We are in a situation where retired people’s pensions are bigger than the salaries paid to the people working in the jobs they left. Something has broken down. All the education and infrastructures we have created should be directed towards a society with decent salaries. Of course for this to happen, we need companies which investigate and innovate, goods with added value, quality education, professional training, etc.

Q: Do you think we need to raise the minimum wage to avoid these abuses?

A:Liberal economists believe it’s a mistake to increase the minimum wage. I think that paying a decent salary provides a mininum of social protection, something which is necessary for people to live reasonably. In the end, what is happening is that children can’t leave home, can’t get married, have their own lives etc.