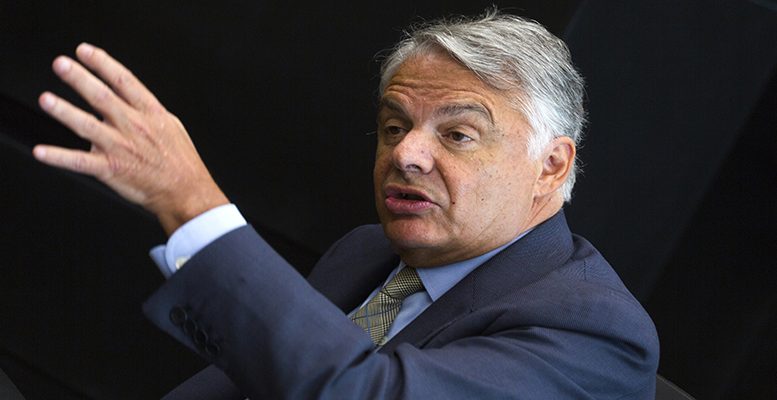 Ignacio Garralda, who is an acknowledged expert in corporate governance, heads up the mutual organisation, Mutua Madrileña, which may explain some of the views he holds. “I believe that companies have to make an effort to generate quality jobs so the recovery in confidence and consumption ends up being consolidated. And this probably means that the number of temporary contracts has to be reduced.” Garralda is also deputy chairman of BME and a board member in Endesa and Faes Farma.

Question: A short time ago, you said that Spain is in the best position to keep growing, although uncertainty remains for some.

Answer: Between 2015 and 2017 GDP is going to expand, foreseeably, by 9%. We are at levels of growth which were unthinkable three years ago, so I think there are fairly well-founded reasons for being optimistic. And it’s about time. There will always be uncertainties, but we need to cling to the good fact that our economy is performing much better than the majority of European economies.

Q: Why is Spain growing like that? Why is there such extreme volatility in the economy? Europe is more stable.

A: There is a pendular effect. When something has declined a lot, the recovery is also normally greater. Furthermore, there is no doubt that now our fundamentals are favourable and sustainable. Firstly, due to the crisis, companies had to expand to overseas markets, which fuelled a big rise in exports. This has improved our trade balance in the first instance, as well as contributing positively to GDP. But the Spanish economy is also growing because there is a recovery in consumer confidence, which means more is consumed as domestic demand increases.

A: Spanish families’ disposable income has grown 5% in the last two years, which also justifies this rise in consumption and demand for housing.

Q: So in the end the austerity policies have been beneficial for Spain?

A: Our country had to contain its spending, which was out of control, and cut its debt. Public investment should be maintained, but the unproductive investments which were made before the crisis should not happen again. Investments have to be made, including public ones, with clear criteria regarding returns and sustainability.

Q: Recently you said that Spain’s economic growth model is stable. But there are many people who say the productivity model needs to change. So where are we with all this?

A: It is already changing. The export sector is very strong and this is something which has changed the most with respect to the past. Now it’s not just the big Spanish firms which operate overseas. The crisis has driven businessmen, in general, to expand internationally. And once you’ve done that, you don’t want to leave these markets behind, even though the domestic market has recovered.

Q: Will this increase in exporting be temporary?

A:  No. Once you go overseas and obtain your market shares competing with foreign companies, this is then structural. Now what we need is the other part of the change to the productivity model, R&D, which is negligible in Spain. We spend hardly anything on this item. This must be changed: the economy needs to be focused on sectors with more value added. This is definitely a pending issue. The strange thing is that industries have managed to export so much, with so little R&D. Our industries have been competing overseas on price, given that during the crisis salaries were massively contained and there was an internal devaluation. Now the aim has to be to increase salaries and the quality of employment, without damaging our capacity to compete. And this has to come from an improvement in our productive system’s competitiveness and added value.

Q: Would you dare to say that the worst of the adjustment period is over?

A: Yes, of course. I believe the hard adjustment period is over. The possibility that the company where you work implements a labour force adjustment plan is now reduced. We are seeing some small salary rises, an increase in available income and a reordering of the domestic economies…There is still a lot to do in terms of job creation and, above all, quality jobs.

Q: Is this temporary contract situation in Spain normal in Europe?

A: It’s not so normal. Poland is the only country in the European Union where there are higher rates of temporary employment. And only Portugal and Croatia are close to our levels. We have arrived at this point due to the heterogenous nature of our contracts which, in my view, we should try to homogenise. There may not be such a high rate of temporary employment in France and in other countries, but they have more part-time contracts. This is what happens in Germany, for example, with their minijobs.

Q: Do you believe it’s urgent to solve this issue of temporary employment, which is closely linked to job insecurity? And how do we do this? No-one seems to want the single contract.

A: I think that companies have to make an effort to generate quality jobs so that consumer confidence is consolidated. To do this, the number of temporary contracts has to be reduced.

Q: The fact the deficit has not been cut is a disaster for the Government. Or is that it didn’t want to implement even tougher adjustments?

A. Possibly both things. After so many years of cuts and asking citizens to make sacrifices, the margin for maneouvre runs out. They couldn’t ask for more. But what I do think is that perhaps the public adminstrations have failed to apply in their own case what they applied to others, ie companies and households.

Q: The basic expenditure items are pensions, unemployment, health, education…that’s 90% of the total.

A: Even so, I think there is room to make savings. For example, as far as health is concerned, if things are done well, there is room to cut costs without damaging the service. Our public health system is a social asset which should be maintained with the highest standard of quality possible. But a more integrated and less disperse management of the system could avoid complexities and make spending on it more efficient.

Q: It’s said that the pension reserve fund, the piggy bank, has enough money for two months. Now it’s time to tell the truth. How can this situation be resolved?

A: It’s a very serious problem. It always was, but now it’s urgent to find a solution. So much so that the political parties are reviving the Toledo Pact and working to find solutions. Currently, the substitution rate (what you get when you retire compared with your last salary when you were working) of the Spanish state pension is about 82%, well above the average for the OECD, which stands at 53%. What we can expect in the future is that this will gradually be cut. What’s the solution? It seems reasonable to continue with the state pensions. But we should provide incentives for a private system, with tax advantages, so workers and companies put aside part of their salary in order to guarantee enough for their retirement.

Q: Do you think that part of the pensions will end up being paid out of the Budget?

A: It might be that widows and orphans’ pensions are paid from that, but I don’t see much difference with the current situation. People don’t care whether their pension is paid by the Social Security or comes out of the Budget.