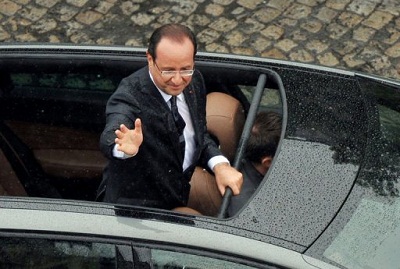 After the news came in of French president François Hollande’s brief encounter with the ever irresistible forces of nature, I began to consider in all seriousness what my mother said about the just sworn-in European leader: “poor thing,” she had muttered during our daily London-Valencia FaceTime conference, which is motherly talk for the more common ‘that guy’s a loser’ remark.

Indeed, he was struck by lightning twice in just hours. Here’s the second hit… Many Spaniards feel welcoming towards Hollande and his relatively safe speech against what in peripheral Euroland most protesters call austerity, meaning public budget cuts. As always, when expectations spike triggered by populism, he who embodies them will suffer the crudest general despise once disappointment settles in. Because it will. Not only France’s economic stand seems weaker day by day, undermining Hollande’s bargaining power in the context of an argument with German Chancellor Angela Merkel, but the truth is that if he were to turn around the course of the fiscal tightening policy now in place, its consequences for the euro Mediterranean economies and the common currency would be self-defeating.

The majority of Europeans are not contrary to austerity. The Greeks, for instance, represent an honest proof of the extraordinary commitment to the euro project, with some 70 percent of support even in the current circumstances. Europeans want the euro to survive. What they rebel against is the way public financed spending is being restrained. For all the violent or peaceful civil demonstrations across Europe, I believe in Athens as in Rome or Madrid the taxpayers and the jobless, the pensioners and the students cannot wait to see die State funded profligacy in useless enterprises, not to mention the tumour of corruption that asphyxiates the real private sector initiative.

Yet, no one holds within the European Monetary Union the mandate of enforcing austerity in the correct manner. The markets are the anti-austerity movements’ best hope, if only they realised: in fact, investors are punishing governments in Greece, Italy and Spain not merely because budget cut programmes in these countries are insufficient but also ill-engineered in the medium and long term for their economies to recover and generate income with which to repay debts.

France and Belgium, analysts warn, will be next in the Euroland’s sorry domino after the periphery ends up insolvent under the pressure of too high costs on credit. Germany’s position is becoming isolated: with less than 1.5-percent interest rates on the 10-year bund, Germany isn’t the motor of Europe but its rubber ring to keep barely afloat.

According to the Bank of Spain, €30 billion left the country earlier in the first quarter of the year. Numbers by bank experts point at a €125-billion capital flow being transferred from southern Europe to core Europe. Were Hollande to convince the European Central Bank to increase its liquidity injections, the result would be to inflate that flow, not to revive the real economies of the laggards. You need efficient reforms for that, and for now it’s the national leaders who retain the last word.

But it is the markets that are forcing States to come clean. The dissociation between investors and ordinary citizens is not as dramatic as it usually is described. After all, governments must regain markets’ trust with stringent spending plans as much as voters’ confidence with those plans being neat and fair.

Whether Hollande’s aim is to lift the burden of austerity when wrongly placed on the easiest target of basic public services, or simply echoes the obtuse complaint of a vicious European political class accustomed to suck public money at will, we don’t know yet.

But his “markets are the real enemy” line sounds awfully odd for someone whose life and career differs nothing from the habitual European politician. Unfortunately, so his training in financial matters appears to be.

2 Comments on "François Hollande is a loser"