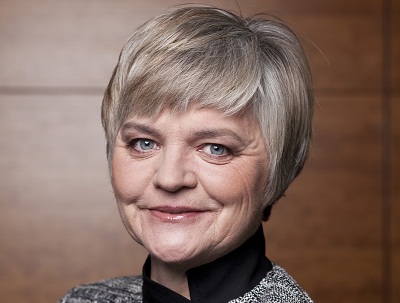 Helga Jung is the first woman to enter the board of Allianz, the largest insurance pool in the world, in the center of German finance. The group became Allianz Societas Europaea (SE) in 2006. With more than 78 million customers, 142,000 employees and a global presence in 70 countries, Allianz obtained an operating income of €7.9 billion in 2011. Its assets under third parties management are of €1.281 billion.

What risks do you see in Spain, euro peripherals countries … and in the U.S.? We are optimistic. We think that eventually the debt crisis will be solved. However, it is clear that the high government debt burden and substantial budget deficits in some European countries like Spain and in other industrialized countries like the U.S. are the biggest current risk to the entire world economy.

You are optimistic about the crisis. How do we get out of it? Although the situation remains extremely critical, we believe that remarkable progress is being made in combating the crisis. The main thing is to consider that a battery of measures will be needed in order to solve the debt crisis in the long term. This includes a fiscal and political integration, with a fiscal pact that includes the constitutional debt limit, structural reforms in highly indebted countries, especially in labor policy, and the expansion of unconventional measures of an ECB intervention, that is to say, to continue providing credit during the crisis.

However, the European financial crisis is affecting the profits of German companies. Allianz itself, Commerzbank, saw their results cut in half in 2011. The reason is Greece and its bonds' loss of value. Nevertheless, Allianz will pay a high dividend of €4.5 per share. That means that the company will distribute €2 billion among its shareholders, 81% of its profits. How do we understand this strategy? Our business model is strong and solid. The fall in profits has little to do with our operating performance because it was caused by impact of a €1.9 billion loss on Greek debt and other investments in the financial sector. In the Greek debt restructuring a debt reduction of 50% is considered. We have applied a 75%, so we do not contemplate any additional depreciation. And of course, we remain convinced of the strength of Allianz. In 2011 we had strong operating results compared to the previous year. And so we will continue in 2012. With this €4.5 dividend we want to express our optimism and our belief that even in the year 2012 we will continue to do well. However, in the future we will persist in our goal of sharing 40% o

Another major challenge for Europe is the aging of population. According to Allianz in 2050 there will be 115 million patients affected with dementia in the world (1.6 million in Spain). What are the consequences for the economy? An ageing population means that the birth rate falls while life expectancy increases, and the working people decreases. Thus 2010 was the first year that there were fewer people who entered or could enter in the labor market than people who retired. We estimate that of 331 million EU workers in 2011 we will have 295 million in 2050. This will have dramatically negative results: the costs of social security systems will increase as well as retirement costs. Consumption will slow down and also the ability to innovate. That could lead to possible stagnation of European markets or they could even decrease, which would mean a clear welfare loss.

Is 67 a fair retirement age? Is it sufficient, given that life expectancy continues to increase? Retirement at 67 years old is not enough to offset the increase in life expectancy in the long term and according to mathematical calculations. That means we should introduce flexible models. If everyone of us and in our personal capacity contributes its bit for our welfare state, we will strengthen intergenerational justice together. Who in old age still feel good should support young people.

Allianz's President, Mr. Diekmann, is suggesting to make the current social service -that many German youngsters do for a year- compulsory. What do you think of that? How do you motivate young people to take more responsibility when many feel they have nothing, no future? I think many young people do not know what consequences will demographic change bring to our society and all walks of life. If we want to find solutions, we not only need threatening scenarios but a positive image of our future, give the young people the feeling that this is not an insurmountable challenge.

Allianz is obtaining good results in France, Italy and in Central and Eastern Europe. What is the situation of Allianz in Spain and what are your goals there? Despite the difficult economic situation, the units of Allianz in Spain continue to show good results. Gross premiums rose 1.3% to €2.98 billion. Allianz is one of the leading insurers in Spain, with 3.7 million customers, 6 million policyholders and 2,500 employees. it is especially strong in the car industry. One in ten cars in Spain has an Allianz insurance, which makes the company the second most important in auto insurance. Sales are conducted through various channels: the same network of dealers and representatives, through Phoenix Direct and through sales in cooperation with the Banco Popular.