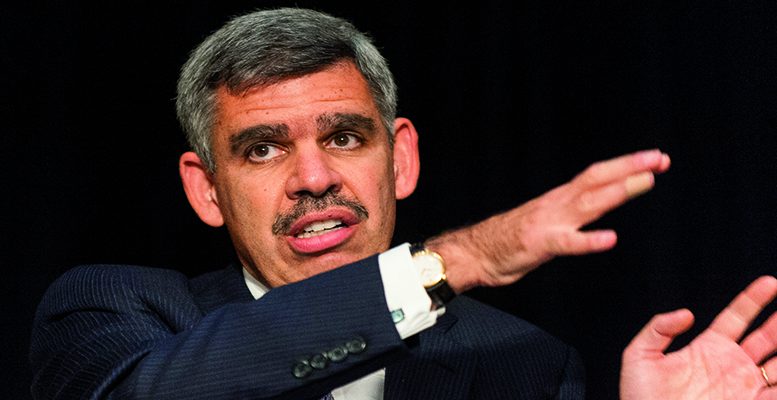 Mohamed El-Erian is ex co-director of Pimco, the world’s biggest fund management company, former manager of Harvard University’s investment fund, and currently chief economist at the German insurance group Allianz (which owns Pimco). And lately he has been touted as a possible sucessor to Stanley Fischer as Fed deputy chairman. In fact he has been a long-time candidate for heading up the IMF or for becoming Treasury Secretary. Although the latter would be as part of a democrat president’s executive.

El Erian has just published in Spain ‘The only important thing. How to avoid the next, and imminent, financial collapse.‘ His thesis is that monetary policy cannot do any more.  The governments of the democratic countries have not been capable of coordinating economic policies which solve the problems created by the last crisis which, in many cases, amplified them: inequality, deficient regulations, a lack of international coordination and the “financiarisation” of the economy. The result has been a complete and utter dependence on the central banks to get out of the crisis.

Q: You attribute the great majority of the decisions which have allowed us to exit the crisis to the central banks. But you have also said it’s now time for the governments to act.

A: Yes, because asset prices don’t correspond to the fundamentals. The Federal Reserve is trying to avoid this dynamic via its monetary policy and declarations.

Q: You believe that time is running out. You say we will soon get to a point of no return, where we have to choose between inclusive and balanced growth or an explosion of protectionism. When will this moment come?

A: It’s very difficult to know. But there are multiple signs telling us we are getting near to it. All you need to do is look at the amount of unlikely things which have become a reality in the last year and a half. And I am not just referring to economic issues; also political and institutional events. The recent G-7 and G-20 summits have shown that it’s becoming increasingly more difficult to coordinate an international response to problems which are continuing to grow. Up to now, these summits reflected the problems there were in putting the policies which had been agreed on into practice; now we see there is not even an agreement on deciding what the problems are in the global economy.

Q: But in the last year, the divergence in the central banks’ and the governments’ policy, far from decreasing, as you would like, has in fact increased.

A: Yes, but that’s changing now. Due in part to the increasing acknowledgement of the fact that in the future there will be more financial instability, four systemic central banks are gradually taking their foot off the accelerator: the Federal Reserve, the Bank of England, the ECB and the People’s Bank of China. And the Bank of Canada recently raised rates, arguing precisely that asset prices, particularly housing prices, contribute to inflationary risk. Only the Bank of Japan is resisting this gradual change of stance, at least for the time being.

Q: One of the consequences of the massive injection of liquidity is that volatility is at record lows. In a context of monetary policy tightening, should we be prepared if the market suddenly begins to rise and fall, and an apparently unimportant event gives us a a fright?

A: Of course we should be prepared and for a very simple reason: behind the scenes, all this trading is based on the fact that the central banks are BFF. In other words, the markets’ best friends (BFF is a US colloquial expression, “Best Friends For Ever”). This means that asset prices are very disconnected from fundamentals and there is almost zero volatility. This also leads to excessive risk-taking, which at the same time is exacerbated by the volatility models in use, like the VAR (Value At Risk). In this situation, the market’s exposure can be huge, both from the point of view of individual risks as well as the number of positions and participants – many more than at first sight – extremely vulnerable to sharp market shocks.

Q: But the central banks are the ones who have fuelled this complacency.

A: The central banks have created a very comfortable market environment, and now the “conventional wisdom” of the operators is that this is not going to change. The question is how the central banks can convince the operators, without provoking sharp changes in asset prices, that the situation of unlimited liquidity which we have experienced is gradually going to come to an end. The Fed is working on this and the ECB will be soon.

Q: The problem for the central banks is that there is full employment (in the US) or employment growth (in the EU), but there is no wage inflation. Furthermore, productivity is not rising or is even declining.

A: I suspect there is some problem with the productivity statistics. But we shouldn’t forget that there is a tremendous problem: the lack of investment, which is what makes economies more productive. This includes investing in infrastructure, reducing the anti-growth effect generated by tax regimes, better systems for education and ongoing training, greater collaboration between the public and private sectors in specific projects…