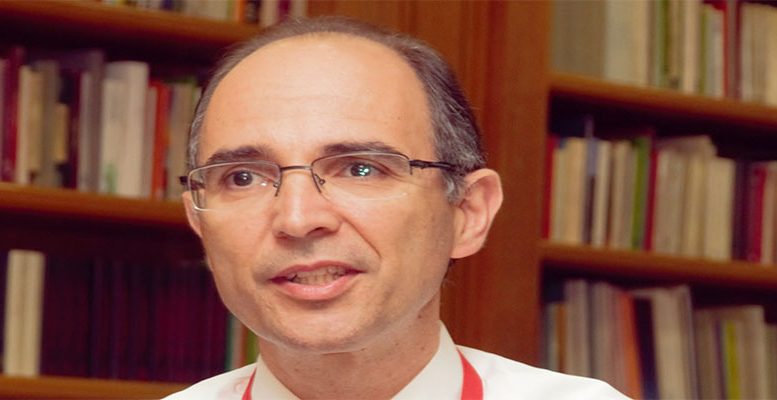 Papageorgiou was invited to Spain by the University of Navarra.

Mari Pinardo / Raúl Poza | The global context of trade suffers a slowdown but that’s not in all countries and Spain is an exception. Chris Papageorgiou, who is Deputy Unit Chief at the International Monetary Fund recently pointed out to The Corner that  “probably this expansion is not more things being exported, is less things but more expensive.”

Q: During Q1’16 Spanish exports grew 0.2% compared to those of the Eurozone and the EU, which contracted 0.5% and 0.9%, respectively. Does Spain’s outperformance compared with Europe’s stagnation mean the country is on the right path?

A: Let me start by saying that yes indeed the trade has been slowing down, there will be a nice study by the IMF “The World Economic Outlook” in the next few months. It will document these broad global trends and one thing that will come out is that this is a global phenomenon that trade has been accelerating for a long time and since a year or even more there has been a deceleration in many countries but not all.

That is the context, is what we see is a global slowdown of trade but that’s not in all countries and Spain is an exception. I am going to move on a little bit on the issue that I will be talking about on the export quality, which is kind of very important issues, is not only what we export but the quality of exports so you can increase the profit margins.

Let me talk about that because it’s important for the context of Spain and other countries that are almost following like a strategy on these issues.

The way to think about this issues is that for a while countries though about diversifying their exports by exporting more goods, so they will go from exporting some manufacturing and then they will double this and go to some high tech good and that will be the common way of diversifying exports.

So now the game changed quite a bit not only in Spain, in other countries like Vietnam, Malaysia and China where is not necessary about exporting different types of goods but increasing the quality of goods that you are already exporting.

I can give you some examples. Let’s take a country away from Spain to make it more general. For a long time Vietnam was considered to be a low income country, very poor so they would export two things some agricultural goods and cotton shares to United States. Over the last 15 years what they have been doing is that they have stayed with these two products but they have increased the quality. For example now they are exporting the highest quality rice to Japan which is quite expensive and in cotton shares if you look at United States the best stores in the US import this very high cotton from Vietnam. At the same time they have other high quality goods like semi-contact technology, Apply computers and these products.

Back to Spain now, we see a lot of value of the developed economies like Spain to concentrate more on the quality of exports. Probably what you see with this expansion is not more things being exported, is less things but more expensive. I think this is the change, the biggest change in this market where you will have more concentration in certain things but you increase the quality of these products so that you receive more profits. I haven’t done the work but it will be interesting to look at where this growth in Spain comes from in terms of trade. We have now a dataset developed at the IMF where you can actually look where the growth is coming from, which products and which quality dimensions. We can see if growth comes from the manufacturing sector and we can trace it and analyses ways where we can strength it.

We think that the previous wave of globalization was on goods, it was China and more products, but the new way is going to be on services. For many of the countries to be successful need to think to export not only goods but services.

Q: The US is trying to promote measures to stop the deficit with China with an exports tariffs increase. Should the Eurozone consider taking a similar action?

A: There is no IMF policy on this but I can give you my views from my work and the answer to your questions is no.

You run two important risks. On one side we know from the theory is that if you include these taxes have major inefficiencies, you can benefit certain sectors of the economy but other sectors are destroyed and we know this theory and evidence. Secondly, for me is the bigger issue is the timing, we are at the point where this trade with China is slowing down for many reasons, it’s the time when is going to reverse, we are going to start seeing more imports of China from abroad. We don’t want to play this game of putting taxes in their products because they could do the same when the time comes. This is not the right timing to this because the trade will reverse and they will take advantage of these tax laws.

For so long the international community including Spain and other European countries have been extremely disciplines about not imposing taxes or quotas, they didn’t impose major taxes so now is the time of take advantage of this, as China starts importing more staff we should not give them the opportunity to start applying taxes.

Q: In last few years more and more developing countries have  joined the international trade market. First Japan, then China and India, little by little. Who could be the next one to enter the scene?

A: On that I have to bring in this discussion of global value chains. Is this idea that networks that start in China, the network is about producing little parts of the product that then fit in a bigger country like China.

From this perspective we have Asian value chain, countries like Vietnam, Laos, Cambodia, Malaysia, Philippines where they produce parts of a bigger product, like an iPhone, that then go to China to assemble them. Based on that discussion we will see a lot of Asian countries jumping in, again Malaysia, Indonesia, Laos, these countries used to be quite poor but now with this process where Chine is in the lead but they subcontract the little parts and there is a reason enough, wages have increased enough not to justify the prices so the Chinese need to subcontract different little parts so this is an opportunity for these countries to jump into trade.

Spain is very famous for the clothing stores; they have very innovated way to producing these things. One idea would be to have similar models in Asia, because Asians are really starving for designed clothes, the time they start making more money they will turn their attention to clothes so Spain has a big opportunity in this market taking a similar model. We are talking about of millions of people demanding these kinds of clothes. The headquarters of the company is in Spain, is like iPhone, Iphone is in Sillicon Valley, the design is made there but the production is in Asia. What I see is a huge potential for Spain for these products, these clothing products will have more selling markets there, this market will explode.

Q: Roberto Tamborini (Professor of Economy at Trento ) recently told The Corner that “ the evolution of exports in an stagnated world is a zero sum game.” How are relaxed monetary policies affecting exports?

A: The expansionary monetary policies from the United States to Europe basically means that money is very liquid, it makes possible for the economy to perform like a Ferrari not like a regular car. The idea behind that is to stimulate the economy to get out of the recession, in term of trade you would think that this would help because it provides more money to people and people would buy more stud but in fact we don’t see that. Trade is going down, but the reason of this slowdown is not monetary policy but global factors. For a long time monetary policies tried to keep the level of trade high.

You will see some rebalancing of what has been going on for a while, so the questions now is what will be the effect to trade and the markets? So far the markets have reacted well, we don’t have huge variation but what remains to be seeing is to see what Chine does, whether it will keep growth at that high level or if it will slow down. If China slows down, demand for everything will slow down (in terms of general trade, exports and imports).

One last point on the comment of the professor, I think otherwise, it is very hard to measure trade, I don’t think there is zero sum game, there are huge externalities and we cannot really estimate the value added to exports and imports.