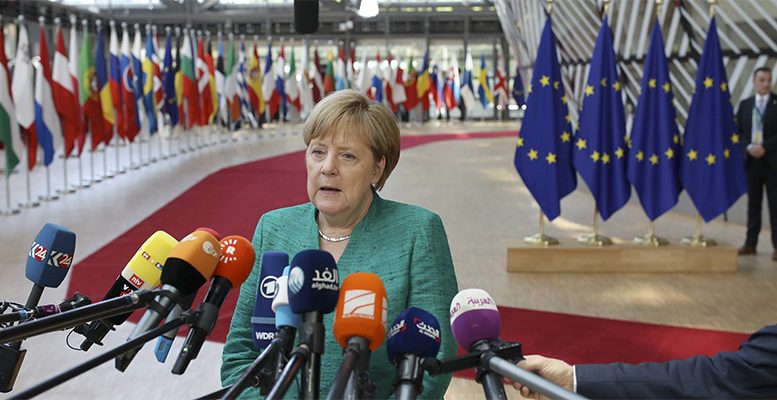 Angela Merkel at the EU summit of 28 June at Brussels

After talks that lasted until the early morning hours on Friday, EU leaders reached a deal but the differences remained while heads of states issued victory statements that the summit was a “success”.

The only “success” was that the countries attending the summit did not fall out with each other completely. As a matter of fact, EU leaders have papered over their divisions.

Old proposals rehashed, postponed internal asylum reforms and vague new plans to create migrant centers within and outside the EU.

But the reached agreement will now have to stand the test of reality.

The agreement is big on promises and short on detail. This summit that focused on migration failed to tackle the fractured nature of asylum, and leaving the prospect of internal border controls unanswered.

For some summit participants, the broken EU internal asylum machinery lays at the heart of the political impasse as people seek out EU states where they have much greater chance of being granted international protection.

And, for the first time, in a long time, she did not take the reins at an EU summit.

The era when Germany could resolve European crisis by making political decisions for other in the EU have ended. As the division in the EU and Germany have widened Merkel must now find a way to bridge the gaps.

EU diplomats said that political tremors are still being felt across Europe, with populist, anti-immigrant parties on the rise in many countries. It is above all a shift to the right of the political spectrum toward making it harder to cross into the EU. The populists have prevailed.

The summit exposed the EU’s long standing divisions on migration between Central Europe which refuses to take any refugees, and western countries, which are seeking “solidarity” even in token way.

It also underscored how Europe’s 2015 spike in immigration continues to haunt the bloc.

This summit was not a good night for Giuseppe Conte, Italy’s new prime minister who irritated everyone, by holding up procedural matters until the migration discussion was over. He managed to take the entire summit hostage.

It is unfortunate that Italy’s new government of right wing populists, with its ruthless rejection of people stranded at sea, came out on top.

The 27 EU leaders were astonished and unhappy over Italy’s hardening its position and that it was ” a very virulent discussion and everyone jumped on the Italian” according to EU diplomats. The future of the European Union hings on whether it could find answers to the vital questions that are posed by migration. It will take creative thinking to keep the EU together.