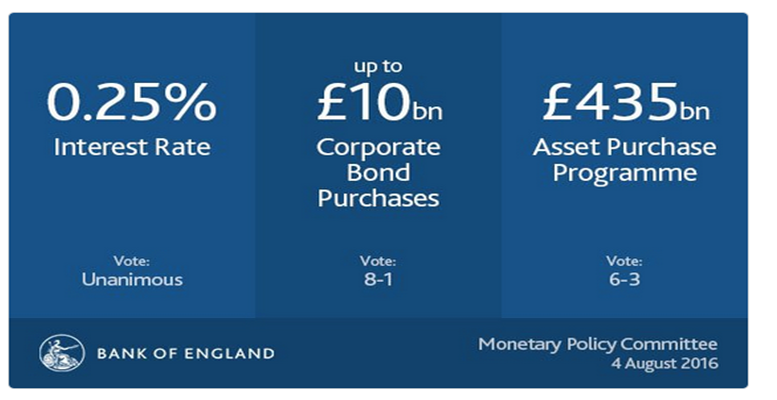 The Bank of England announced it will cut rates for the first time in 7 years, to lowest level ever (0.25%), and expands QE by £60bn (including corp) in an attempt to stimulate the economy.

Never in more than 300 years of History had rates been so low in England. The country’s central bank governor Mark Carney announced a quarter-point interest rate cut on Thursday although record low borrowing costs are already causing headaches in the financial sector, as they’ve driven down the rate of return on government bonds (particularly bad for pension funds).

The BoE also reduced its growth expectations after the Brexit vote to 0.8% in 2017 –down from 2.3% in its May forecasts. The country’s 1.8 trillion pound economy is contracting faster than at any time since the the global financial crisis, as the last figures show: the Markit’s PMI for the services sector fell to 47.4 in July from 52.3 in June, the steepest drop since records began in 1996 and the worst reading since March 2009.

“July saw a dramatic deterioration in the economy,” said Chris Williamson, Markit’s chief economist. “The downturn, whether manifesting itself in order book cancellations, a lack of new orders or the postponement or halting of projects, was most commonly attributed in one way or another to Brexit.”