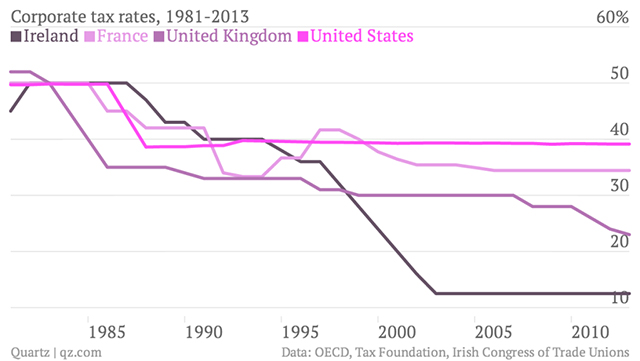 The Irish Government appears to have appreciated the shift towards international consensus with regard to changing the status quo. In a move that may have raised the eyebrows of many a finance minister across Europe- Irish Minister for Jobs, Enterprise and Innovation, Richard Bruton, told The Irish Times:

“Ireland is fully engaged with this process. We can gain from the opportunities that will arise from this. I think our tax base will grow as businesses move away from tax havens.”

Dr Constantin Gurdgiev, a lecturer at Trinity College in Dublin, and an expert on the Irish economy, claims this shift in policy is an imperative step which the Irish authorities have been keen to make.

“To be fair the Government, they have been somewhat proactive on this. Last year they closed down some of the most egregious loopholes in these taxation schemes.”

Dr Gurdgiev says that with pressure mounting for a change to international taxation schemes, Ireland desperately needs to be inside the debate.

“Ireland has started to be compared unfavorably with other jurisdictions with regard to siphoning off billions- if not hundreds of billions- away to from core partners such as Germany or France. The reputational damage from this could be quite significant. That´s why Ireland needs to be seen to be a proactive and prominent voice in any changes that are coming,” he said.

While any changes are likely bring some initial pain to the Irish economy, Dr Gurdgiev believes that- in the longer term- Ireland can use the possible changes to its advantage.

“Ireland-amongst other countries-have for too long used superficial competitive advantages as a means to run the economy. But those superficial advantages often inflate wages in a particular sector, because essentially companies are availing of favorable tax codes. When those are removed, the country will be forced to adapt policies that make them competitive in a real sense. There is no way to know yet how significantly the changes will impact on Ireland; because we don´t know what the changes are going to be. But it does look like things are going to change, and there will be a knock-on effect. Ireland must ensure it is part of the conversation before they do.”

A source of friction

The ability of multinational firms to limit their tax burden by taking advantage of tax loopholes in different countries and jurisdictions has long been a source of grave concern within the monetary union.

Schemes in Ireland, Luxemburg and The Netherlands have exasperated fellow governments across Europe- not to mention the United States. US President Barack Obama made the issue a top priority at a G8 meeting in June of last year. Obama has previously stated that the companies were in effect “gaming the system”.  The OECD proposals this week are geared towards closing such loopholes in a bid to secure a larger global tax take from large multinationals.

Seven major tech companies made headlines in Spain this year after reports emerged that Google, Amazon, Facebook, Yahoo, Ebay, Microsoft and Apple had paid a combined total of just €1.2 million for their business operations in Spain.

Be the first to comment on "Corporation tax: Irish soften stance amidst growing international pressure"