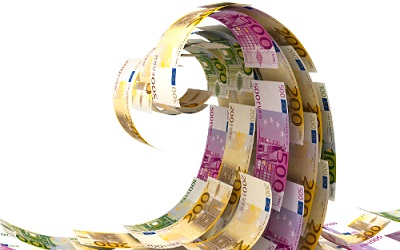 By Luis Arroyo, in Madrid | The Bundesbank has protested for the bulk of credit on the other central banks of the euro zone. The amount credited is €500 billion. The German Central Bank now worries about the risk of default, and suggests that these assets must be collateralised by real assets from the countries that have generated them.

As Wolfgang Munchau says, this display of arrogance is telling, indeed. These accrued debts/credits are produced by the payments and income from external balances of the euro countries. If the euro national economies were more or less balanced, the final results would be zero. But as there is a persistent German surplus, reflection of a persistent deficit of others, these bank balances accumulate in the TARGET or interbank clearing system.

When a Spanish importer of German goods pays through his bank A, bank A requests funds to the Bank of Spain as in Spain there is a scarcity of deposits and banks obtain the necessary liquidity from their central bank. This central bank, in turn, posts a credit to the Bundesbank, which registers it as such on the Eurosystem. It rather is a delayed payment that accumulates.

The true origin of these balances is the permanent trade imbalance, which can not be erased if Germany insists on maintaining its external surplus compared to other euro countries, no matter how much German authorities strive to hide it. A mutual imbalance between two countries only clears when they both want it to go away. It’s like the permanent imbalance between China and the U.S., an imbalance that China protects via administrative measures and an exchange rate always below the equilibrium point.

Not that Germany does the same, to be sure, but it does not let domestic demand expand imports to reduce the external surplus. Moreover, the euro impedes a quicker adjustment of relative costs.

In a monetary union, regional balance of payments is not necessarily balanced because everything else (employment, capital, taxes and expenses, etc.) adjusts. The Spanish region of Extremadura can be permanently indebted to Spain in the same currency, as long as it finances itself through the sale of one of its resources or through emigration to Spain. Money earned will be sent, in part, back to Extremadura, for instance; or capital from somewhere else in Spain will come to Extremadura. Finally, net fiscal flows would cover much of the gap. Free circulation of labour and capital is a necessary condition for a monetary union, a factor that is lacking in the whole of Europe.

The German proposal shows that the current German authorities do not have much intention to fix things via trade or tax. Their only concern is to get a guaranty against the potential default of other countries. At the same time, it tells us that they do not believe in the euro, since these countries wouldn’t go broke while in the euro zone.

It is an invitation to everyone to do the same and ask for more collateral for their loans to, say, Spain. That’s just great.

Be the first to comment on "Listen, Bundesbank: it is not our imbalance, it’s the German surplus"