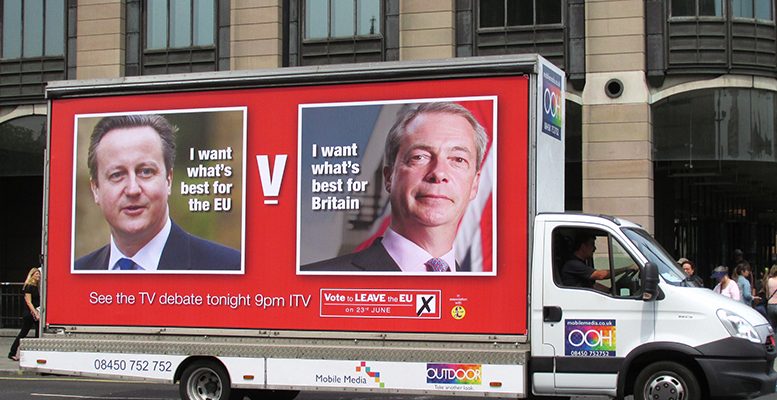 Everyone seems to agree that a Brexit either will create market volatility or already is creating volatility, or both. That’s hardly the news. I think it’s perhaps more interesting to consider the type of volatility created; that is, one with a very uncertain path of interconnected events. While a “leave” vote is likely to cause a quick sell-off in risk assets, the more important market implications would play out over a much longer time frame. UK/EU negotiations post-Brexit could take (formally) two years, or much longer. The market implication is a wet blanket of uncertainty thrown over the UK and EU for a prolonged period.

Estimates vary but anywhere from +1% marginal contribution to -5% from UK GDP over several years. In other words, somewhere between a small boost or a deep recession. (I’m skeptical of the boost). Given the uncertainty of renegotiating with the EU, the potential trade impacts, and the legal and business unknowns that consumers/businesses would be exposed to, I suspect economic activity would take a material hit.

The headwind to UK (and EU) growth

It highlights the increased vulnerability of geopolitical risk during a period of secular stagnation. Growth in the UK is mixed, but suffice to say, it hasn’t been strong enough for Governor Carney and his colleagues at BoE to raise rates as they had promised just 6-12 months ago. Even with the ECB opening the monetary spigots in March, Eurozone growth will struggle to hit 2% this year. Maybe it’s obvious, but the likely economic headwinds from Brexit (perhaps -0.2% to -0.4% annually) can much more easily derail an economy growing at 2% than one growing at, say, 4%. [The same could be said of the unsteady 2% growth rate of the US headed into the fall presidential election].

Other than the direct economic headwinds to UK and EU growth, there are likely to be other proximate sources of uncertainty with Brexit. They include…

In the short term, the market has been relatively accurate in handicapping the probabilities of a Brexit. Through May, odds makers were pricing the outcomes close to 80% Remain vs. 20% Leave. As a result, the markets largely ignored a negative outcome because it was seen as rather unlikely – stocks and GBP were unfazed. In June however, polling data implied material gains for the “leave” camp, odds narrowed closer to 60% Remain/40% Leave, while stocks (FTSE) and sterling sold-off and safe-haven bond markets rallied. At that point, hedging Brexit risk became significantly more costly in terms of a relief rally if the “Stay” camp won. After the tragic events of last week, the Remain camp has been making gains and the market has noticed. Cable ($/GBP) and FTSE are up 4% and 5%, respectively, off their recent bottoms. In other words, the relief rally has been pulled forward as Brexit odds have faded. For all the theoretical talk of “market inefficiencies”, if you believe the odds makers, hedging the risk of Brexit has been appropriately priced: The relief rally would have been most costly when the outcome was most uncertain. Alternatively, you could say that the market “pain” of a Brexit has gone up materially now that it is viewed as less likely and markets have rebounded. In a subtle way, this highlights Durable Portfolio Construction® and “Putting Risk First.” Event risks that are accurately, or close to accurately, priced are difficult to hedge on the fly. Counterparties are not stupid and there is no free lunch. A portfolio run at an appropriate risk tolerance may be able to navigate specific events without unexpected losses. Trying to handicap and then hedge every risk that comes along is hardly a “durable” strategy. It’s more akin to a never-ending parade of 50/50 guesses.