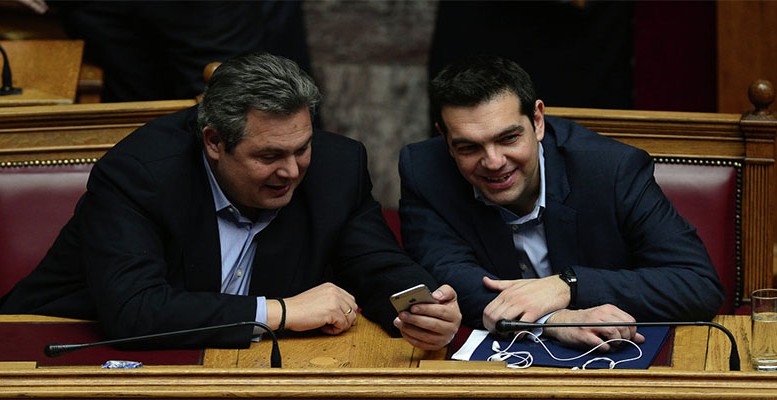 ATHENS | By Nick Malkoutzis via Macropolis | By working with the Independent Greeks, Alexis Tsipras has taken a sledgehammer to the hopes of those who thought he might seek a more progressive alliance this time.

Having let cracks appear in his leftist credentials in January by deciding to work with the Independent Greeks (ANEL), a party that has espoused populist, nationalist, racist and conspiracy-theorist views, Alexis Tsipras has taken a sledgehammer to the hopes of those who thought he might seek a more progressive alliance this time.

The main reason that Tsipras chose to renew his cooperation with Panos Kammenos is that it is the least troublesome option. Independent Greeks were coalition passengers rather than partners over the first eight months of the year. Tsipras knows that as long as Kammenos has his post at the Defence Ministry and some cabinet positions for his MPs, he will not stand in the way of anything the SYRIZA leader wants to do. PASOK and/or Potami would not have been so pliable.

However, being in government with ANEL is not the straightforward, guilt-free politics that Tsipras imagines. In political terms, he is dining with the devil.

His first alliance with ANEL in January, as well as the lack of women in his cabinet, alienated many Greek leftists but also undermined SYRIZA’s support among many in the European left, for whom isolating extreme views and promoting equality are basic principles.

By renewing his alliance with Kammenos, Tsipras has made it clear that he does not believe his decision was an error of judgment. However, it has become evident straight away that having ANEL in his government will compromise his credibility as a self-proclaimed progressive and severely undermine his championing of social rights.

The announcement of his cabinet line-up on Tuesday night prompted outrage when it emerged that one of the ANEL deputies to be included in the government is Dimitris Kammenos, who is notorious on Greek Twitter for his outspoken comments, including anti-Semitic and homophobic tweets. Kammenos was forced to backtrack in June when he used an image of the gates at Auschwitz concentration camp to attack pro-euro supporters in Greece.

The ANEL MP’s inclusion perhaps maintains the political balance within the coalition that Tsipras deems vital to his survival, but it is a punch in the guts for anyone who wants the casual way in which extreme ideas and unacceptable behaviour have been legitimised within mainstream Greek politics to end.

This process really took off in November 2011, when the ultra-nationalist LAOS party was included in a coalition with PASOK and New Democracy as the country teetered on the brink of collapse. The relief that a government with a broad majority (255 out of 300 MPs) was being put in place under the leadership of former European Central Bank vice president Lucas Papademos meant that all other concerns were set aside.

The two main parties, the country’s media and Greece’s lenders appeared oblivious to the fact that a party with known racist views and rhetoric was becoming part of a governing coalition simply to give the appearance of broader support for the programme (PASOK and New Democracy MPs made up a clear majority on their own).

At the time, German Chancellor Angela Merkel welcomed the “broad political support” for the bailout in the new Greek government, noting that “this would make acceptance easier”.

Her remarks very much reflected the mood at the time among European politicians, several of whom made similar remarks. Of course, it is not for Merkel to become openly involved in another country’s internal affairs, but we have seen over the last few years that there are ways in which European politicians can make their displeasure known. For instance, this January they seemed much more unencumbered in their comments regarding Tsipras’s choice to ally with ANEL. This week, European Parliament president Martin Schulz expressed his apoplexy at Tsipras’s choice to rekindle his relationship with Panos Kammenos.

However, it should be clear that this is an issue above all for Greek politics and society to tackle. It must be made absolutely clear where the line has to be drawn. In a country where Golden Dawn was essentially the only party to increase its share of the vote between the January and September elections (from 6.3 to 7 percent) and suffered only a marginal decline in the number of votes (9,000) compared to other parliamentary parties, nobody that considers themselves a respectable citizen or progressive politician should tolerate the presence of people with a warped, divisive sense of the world in decision-making positions.

Tsipras would probably argue that Dimitris Kammenos’s views will not have any impact on government policy because, with ANEL’s presence in the government, he has secured a carte blanche to govern the way he sees fit. If SYRIZA can implement its socially liberal programme, isn’t tolerating the presence of a racist in its midst a small price to pay? Tsipras has already shown that he does have progressive views on civil rights, introducing a new citizenship law for second-generation migrants after it was repealed under the previous coalition. Independent Greeks did not for this legislation. Perhaps the tangible good this did outweighs the harm done by an apparently prejudiced MP’s** inane ramblings on social media.

However, this line of thought would mean legitimising views like those expressed by Dimitris Kammenos through the back door. And, it is exactly this insidious creeping of the borderline for what is acceptable or not that allows evil like that of Golden Dawn to thrive. Failing to establish clear boundaries in Greek public and political life means that they won’t be there when they are needed to protect the most vulnerable. This is an especially pressing matter in Greece’s current state given that the refugee crisis will likely get much more complicated over winter. Independent Greeks’ campaign slogan was that the party is a “necessary good”. Tsipras need to realise quickly that it is neither.

**When challenged about his tweets on Wednesday, Dimitris Kammenos claimed that his Twitter account was used by 15 associates and that he did not write the offensive tweets himself. Later the same day, after a phone call between Tsipras and Panos Kammenos about the matter, he announced his resignation.